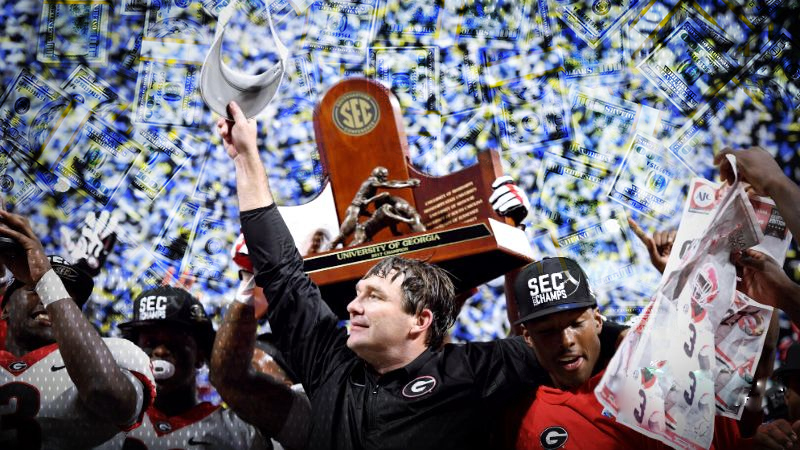 The betting storylines for this year’s games run deep with plenty still on the line for the four-team field in this season’s College Football Playoff. You would have to think that No. 1 Alabama and No. 2 Clemson would head the 2018 field if they each win their respective conference game as a heavy favorite.

No. 3 Notre Dame finished its regular season a perfect 12-0 SU, but in the absence of one more game to impress the CFP voting committee this weekend, will that work against the Fighting Irish? Their current third-place standing with a potential matchup against Clemson on New Year’s Day is a much more favorable option than trying to get past Alabama in a semifinal matchup.

Teams in the mix for the final playoff spot start with the SEC’s Georgia Bulldogs. They are in the best position to make a return trip to the playoff after almost upending Alabama in last year’s championship game, but they will have to beat the Tide this Saturday in the SEC title game as 13-point underdogs to get there.

Michigan’s no-show against Ohio State in Saturday’s Big Ten East Division title game has paved the way for the Buckeyes’ return trip to the playoff. The CFP committee is still going to have to get over the road loss to Purdue and very close calls against Nebraska at home and Maryland on the road. If Ohio State goes on to cover as a heavy 14-point favorite against Northwestern in the Big Ten Championship, it should get the nod assuming that Georgia does lose to Alabama.

The wild card in the playoff picture could be the Big 12’s Oklahoma Sooners. They bring a SU six-game winning streak into Saturday’s title game after running past West Virginia 59-56 last Friday on the road. Oklahoma’s lone loss of the season came in a rivalry matchup against the Texas Longhorns in early October as a seven-point neutral-site favorite. That bitter rivalry will be renewed with the Sooners set as six-point favorites this time around at AT&T Stadium in Arlington.

The Pac-12 gets things started on Friday night with Utah squaring off against Washington at Levi’s Stadium near San Francisco. The Huskies have been opened as five-point favorites and they already beat the Utes 21-7 on Sept. 15 as four-point road favorites.

The top matchup in the Mid Majors is the AAC title game between the Memphis Tigers and the Central Florida Knights on Saturday afternoon. The big story surrounding the Knights is just how high they could rise in the CFP rankings if they kept winning all of their games. The overall SU winning streak stands at 24 games and they are 11-0 this season heading into Saturday as 3.5-point favorite.

The subplot to this particular matchup is the loss of UCF quarterback McKenzie Milton with a significant knee injury in his last game. He was instrumental in helping his team sneak past the Tigers 31-30 on Oct. 13 as a five-point road favorite in the Knights’ closest matchup of the year.

Looking at the games on the board for all 10 conference championships, there could be a heavy lean towards underdogs covering with the points. The lone exception would be going against Alabama, which has won all 12 of its games by a comfortable double-digit margin. Some teams come in with revenge on their minds while a few others like Pittsburgh in the ACC and Northwestern in the Big Ten can go for broke on Saturday night as heavy underdogs with nothing to lose.