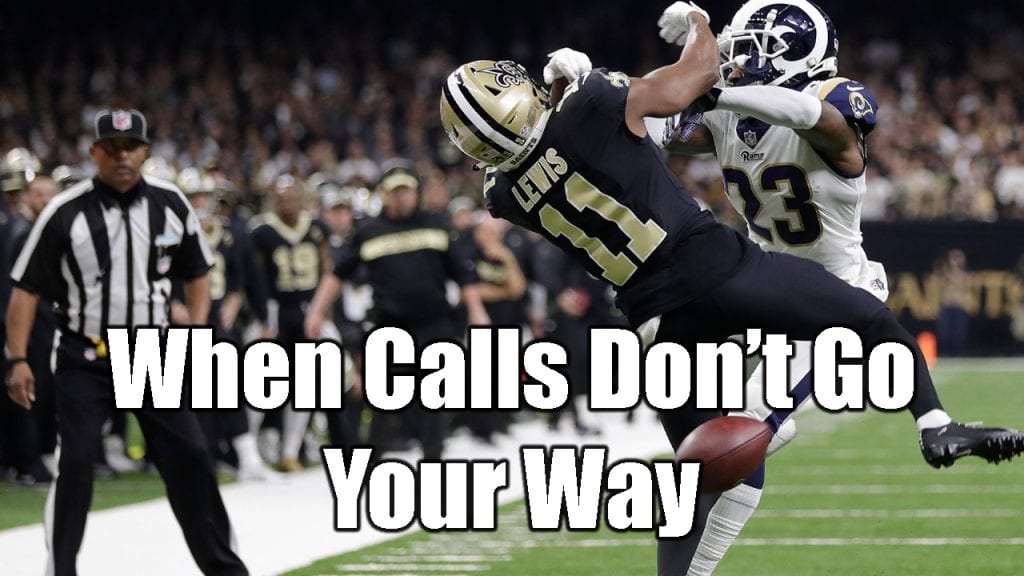 There have been plenty of them this NFL season. It’s hard to remember a season in which there were more blown official calls that impacted more games. From the regular season through the conference championship games, NFL officials were involved in far too many calls that, when reviewed, were wrong.

As a coach, player, or even a bettor; what do you do when calls do not go your way? It’s hard enough controlling the things you can control. An offense, for example, can control the number of penalties it commits. It can control how often it turns the ball over. Teams that commit numerous penalties and turn the ball over a lot generally lose.

But what happens when you reach a 3rd-and-10 situation late in a football game and your wide receiver gets jacked up by a defensive back long before the ball arrives? You would hope that the nearest official would reach into his pocket, pull out the flag, and throw it for the clear pass interference penalty. But what do you do when he doesn’t?

The above scenario is exactly what happened in this year’s NFC championship game. With just 1:49 to play in the game, Saints QB Drew Brees lofted a pass for WR Tommylee Lewis on the right sideline. Before Lewis could make a play on the ball, he was drilled by Rams CB Nickell Robey-Coleman.

The blatant pass interference penalty was not called. Robey-Coleman could probably have been flagged for helmet-to-helmet contract as well but that also went unpunished.

The result of the play, an incomplete pass, left New Orleans with no other choice but to kick a field goal. The problem was that the Saints would leave the Rams a whole bunch of time to march down the field, score, and potentially tie or win the game.

In the end, Los Angeles tied the game in regulation and won it in overtime. How did the no-call affect the Saints? It cost them a shot at a Super Bowl.

Just a few weeks prior to the NFC title game, the Saints faced the Pittsburgh Steelers in a key Week 16 game. In the first quarter, Brees launched a pass into the end zone intended for Alvin Kamara. The pass was incomplete, but Steelers CB Joe Haden was flagged for pass interference. The problem was that Haden had put his hand on Kamara’s back but did not interfere with his opportunity to catch the football. New Orleans would score on the next play to go ahead 7-3.

Later in the same game, the Saints faced a 4th-and-2 with two minutes to play. Haden made minimal contact with Saints WR Michael Thomas and was called again for pass interference. The problem this time was that replays showed the pass from Brees had been tipped at the line of scrimmage. That negates any pass interference call.

To make matters even worse, Thomas would catch the game-winning touchdown pass just a few plays later. He pushed off on Haden to secure the catch. There was no flag on the play.

Like the Saints, the Steelers had their fair share of missed officials’ calls during the season. In a 33-30 loss to the Los Angeles Chargers, officials missed a big one that cost Pittsburgh. On a play in the first quarter, Chargers offensive tackle Sam Tevi clearly moved before the snap and should have been called for a false start.

He wasn’t and L.A. quarterback Philip Rivers found Travis Benjamin for a 46-yard touchdown pass. The Steelers blew a 16-point lead, but the play still affected the final score.

The Chargers were also guilty of a false start penalty in a game with Cleveland. The false start was not called and the Chargers would score a touchdown in a win over the Browns. As a result of the no-call, the NFL, for the first time in history, fired an official.

Need some positive news now? ATB’s Pick of the Day has cashed in on it’s last 4 picks!

The AFC championship game was not without some controversy as well. Trailing by four with roughly seven minutes remaining in the AFC title game, New England quarterback Tom Brady tossed an incomplete pass on a 3rd-and-7 play. Kansas City DE Chris Jones attempted to make a play on Brady as he threw the ball just grazing his arm across Brady’s face mask. Officials threw a flag for roughing the passer.

The call resulted in a Patriots first down and Brady drove his offense down the field to score nine plays later. New England would go on to win the game in overtime. The roughing the passer penalty, which likely should have been a no-call, aided the Patriots in their drive to yet another Super Bowl.

So, what do you do when calls don’t go your way? As a player or coach, you simply keep playing and control what you can. As a bettor … good luck. Just pray you’re on the right side of an official’s call!