What to Do When Your Star is Out of the Lineup 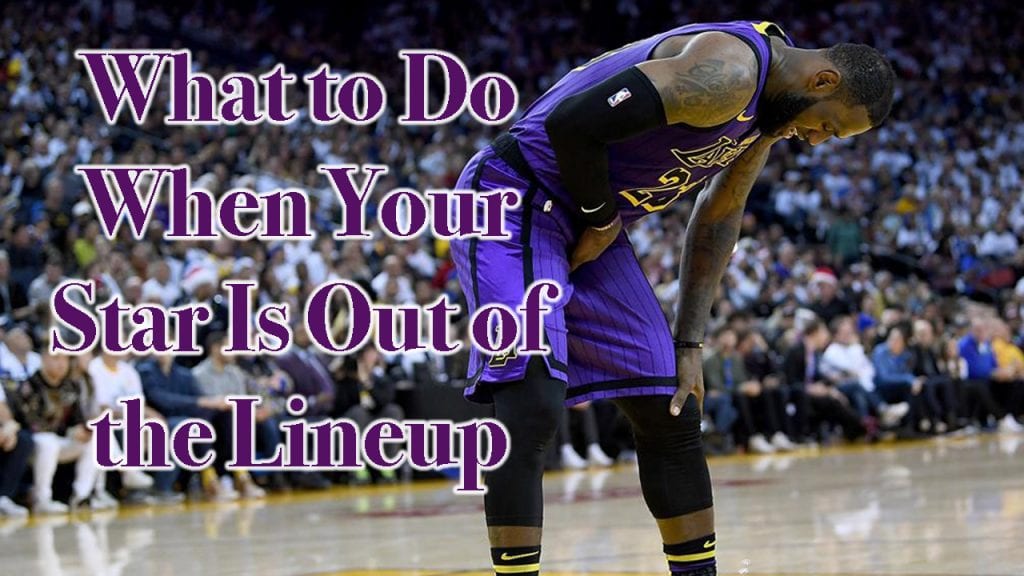 The Los Angeles Chargers traveled to Foxborough, Mass., on Sunday to face the dynasty known as the New England Patriots in the AFC Divisional Round of the playoffs. The Patriots entered the game as a four-point favorite and rightfully so. They have played in the last seven straight AFC championship games … and they played at home.

Take a look at some general sportsbook rules, including football, basketball, baseball and much more.

But, what if future Hall of Fame quarterback Tom Brady did not play? That would have left the Patriots with Brian Hoyer, a capable backup but no Tom Brady, at quarterback. I’m guessing that would have changed the line on Sunday’s game. It would also change betting strategy.

The Case of the Lakers

The Los Angeles Lakers are 23-20 through 43 games this season. They are currently eighth in the Western Conference standings. The Lakers have been as high as third in those standings with LeBron James, the game’s best player, on their roster. Lately, the Lakers have not fared so well. It is a direct result of James being out of the lineup.

James was injured in a Christmas Day game against Golden State and hasn’t played since. The Lakers are just 3-6 with James out of the lineup. Betting lines for the Lakers last nine games have been extremely difficult for oddsmakers. Betting strategies have been hard as well.

The four-time NBA MVP has missed 20 games since April of 2015. In those 20 games, James’ teams are 3-17 against the spread. That speaks volumes to the relative worth of James to his team. When he is out of the lineup, there is a large void to fill. He averages over 27 points and nearly seven assists per game and can take games into his hands at any time. When he is out of the lineup though, oddsmakers take that into account and adjust their point spreads. Bettors should take note as well.

How Much Impact Does a Star Have?

So, how much impact does a star player have on a teams’ performance? Quite a bit actually and when they don’t play, there is a significant difference in their team’s response. Take the 2017 Green Bay Packers as an example.

In 2016, Green Bay had finished 10-6 and made the postseason. Expectations were high for 2017 especially with Aaron Rodgers at quarterback. After five weeks of the season, the Packers were 4-1 and were looking for another win over NFC North rival Minnesota. That didn’t happen.

Rodgers went down with a shoulder injury early in that Week 6 game with the Vikings and the Packers season went down right along with it.

We have all our NFL betting news on one easy to read page, don’t miss any of the information we provide.

Green Bay would lose five of its next six games with Rodgers out of the lineup and backup Brett Hundley doing his best NFL quarterback impersonation. Rodgers would attempt a return in a Week 15 game with Carolina. The Packers lost 31-24 and Rodgers didn’t play again. Green Bay finished the season 7-9 and out of the postseason. The big reason, of course, was not having their star player, Rodgers.

Stars can have an impact in any sport. Take baseball, for instance. In 2016, the San Francisco Giants took second place in the National League West Division and qualified for the postseason as a wild card team. One of the big reasons was starting pitcher Madison Bumgarner. The big left-hander went 15-9 on the season with a 2.74 ERA. The Giants would win the wild card playoff but lose in the NLDS to eventual World Series champion Chicago.

The following year, Bumgarner got into a dirt bike accident in April. He was placed on the disabled list with rib and shoulder injuries. He never fully recovered and suffered through a 4-9 season. Without their ace healthy for most of the season, the Giants wound up 64-98 and finished fifth in the NL West.

The bottom line is that star players are important. With a star player out of the lineup, betting lines will change. Bettors must weigh the star’s value against the change in a game’s line. Oftentimes, players like James are overvalued. When they are out of the lineup, it pays for bettors to really do their homework. Players as valuable as Brady or James are going to have a huge impact on a single game. How much of an impact is for the individual bettor to determine.