This Week in Tennis | TWIT Notes 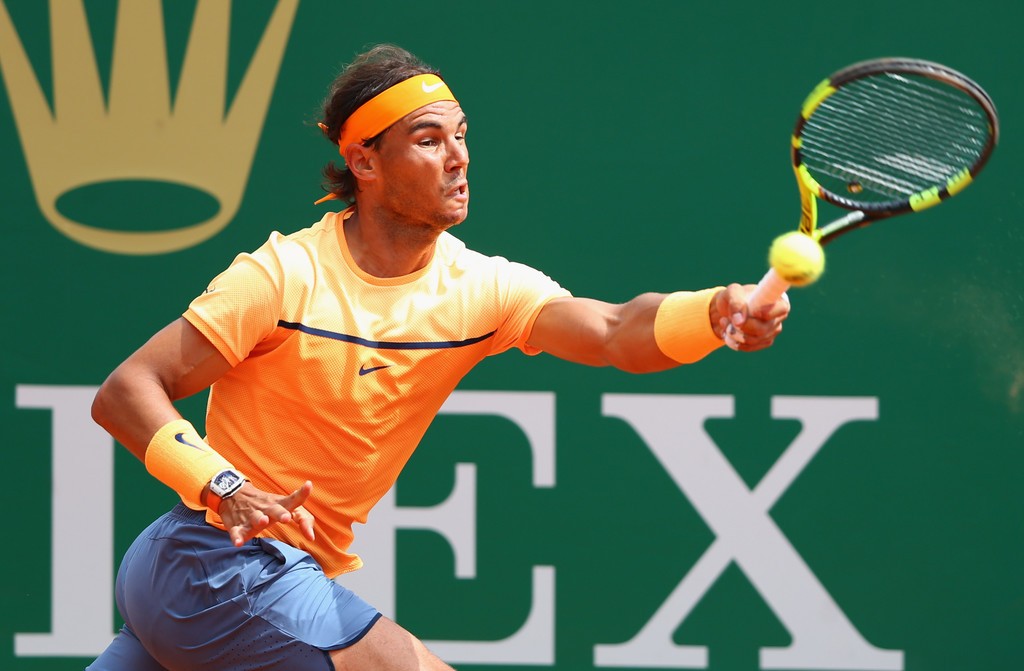 Rafa won Monte Carlo again for the ninth time last week, he had a little bit of help as Djokovic lost early and Roger lost the quarters. He did however beat 2 guys who will have something to say about who wins in Paris in a few weeks.

He made short work of Wawrinka and also took out Andy Murray after playing bad early on. That’s the thing about Rafa, once he gets you in his “web” you can’t get out. You either need to take him out quickly, or not piss him off and hope that he sleeps through the whole match and never gets rollin.

We also want to comment on some of the other guys that Rafa beat. Dominic Thiem is for real. When I was watching him play I saw some of me in him, not bragging, just style of play and getting “brain farts”.

I love the way he is so athletic and can create pace by moving his body in weird gyrations to clear enough space to always getting off a powerful and effective forehand from any part of the court.

His backhand is good but not great. Sometimes he spins it a little too much. If can learn to crank it more often “ala Wawrinka” look out! This kid is for real and of all the up and comers he is only one who can do it all.

The others like Raonic are all “one trick ponies” or “no trick ponies” like Dimitrov, and are limited, but once this guy gets his confidence up its all over.

In the Nadal match he was out playing Nadal for the most part but as happens often with young players they lack the confidence to believe they can get it done vs. the top players. He never won big points but had tons of break points.

He is around 35-1 for RG at America’s Bookie right now but is probably a year or 2 away from winning it all. That doesn’t mean however that you can’t still make some betting him daily for the rest of the spring on clay.

Another guy Nadal played was Monfils. We both watched and bet the Semifinal against Tsonga. Those 2 guys are pretty even but we felt the JW would rise to the occasion especially after taking out Federer in the quarters; he usually doesn’t give up and came back vs. Fed but just was making mistake after mistake vs. Monfils.

The other Frenchmen realized that all he had to do was roll the ball deep and after a while Tsonga would get impatient and do something stupid like hit a drop shot or rip a forehand into the doubles alley.

It was real painful to watch and we are second guessing our futures bet on Tsonga at this point, although we realize he could make the semis again and we are still getting 75-1, but gimme a break what a pitiful effort.

Even when he did try to come back he could never ever put 2 points in row together. We thought it was Monfils who liked to play to the crowd but Monfils was playing like Simon and Tsonga we playing like that jerk from Australia Kyrgios except he couldn’t get in ANY first serves whatsoever.

We also just spoke about Monfils and we are not taking him seriously yet he did have a great draw but after all these years of playing within himself like he did vs. Tsonga and also in the Final vs. Nadal, and not to the crowd, he certainly has top 10 ability and could get to the quarters or better in Paris.

These early clay court tourneys give us good read on how the spring is gonna go. We also noticed that Djokovic doesn’t quite have his “clay court legs” yet, but Federer played surprising well after his layoff.

This week we go to Barcelona, I think I played at that club twice; really slow clay, kinda like mud. We are also going to Romania as well.

Let’s give you a winner here to pad your bank account at America’s Bookie. Take Granollers who has been playing great lately -1.5 sets -108 over De La Nava, sometimes you can get really good value on sets betting. You are getting a -295 favorite and if he attends to his business you have him at -108. Talk soon guys.