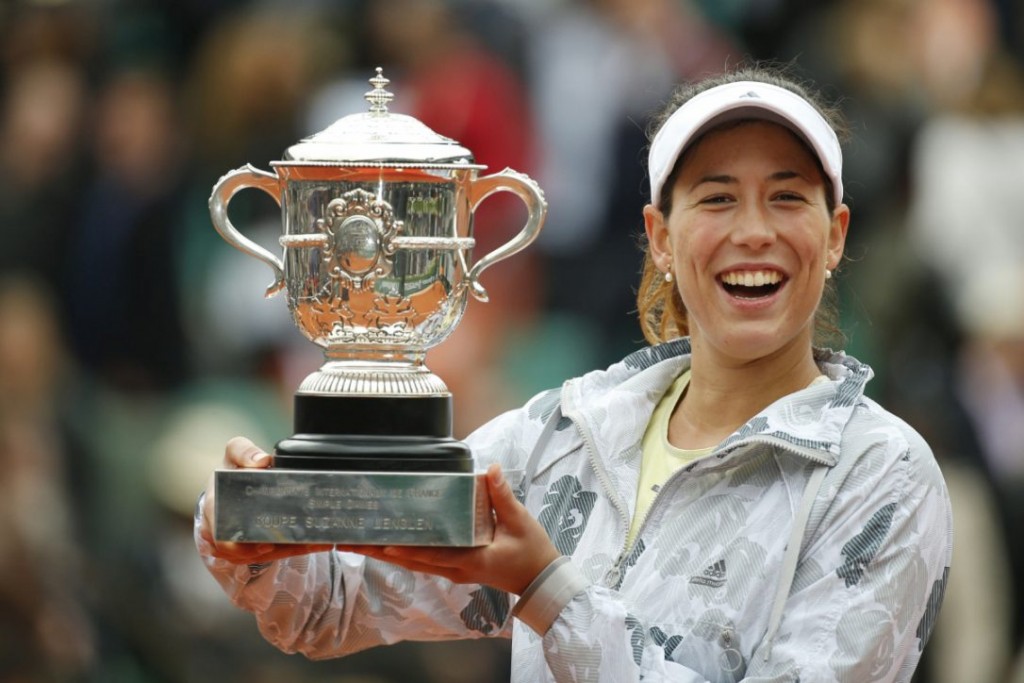 We have to say congratulations to Novak Djokovic and Garbine Muguruza for winning the French Open this year. First let’s talk about Muguruza. Have you seen in quite a while a Champion that had such a sincere smile and happiness after winning the trophy? All tennis players want to succeed, but most are terrible human beings, I didn’t feel that way when I started to Scuba Dive.

Most players are cheaters, and back stabbers and will do anything to get ahead. That’s one of the reasons it’s so hard coming up cuz you call your own lines. Could you imagine Lebron James calling fouls on himself?

I never met Garbine but she seems like a sweet girl on T.V. Do you really think that you’d be saying that about Simona Halep if she had won? Female tennis needs a new fresh face to take it forward and Garbine could be it. Serena is old, Sharapova is on drug suspension, and Azarenka will never stay at the top, so someone must take it forward.

Muguruza is pretty and personable and could be what Ivanovic was too scared to do, be the face of Women’s tennis going forward, until one of the many players with an “OVA” in her name have the game and charm to challenge her in that role.

Getting back to tennis she had great draw but took full advantage if it, and you could tell she was going to win when in the Final instead of showing fear. She was bouncing around and having great time, all positive energy. That’s what it takes to win. Serena was thinking about losing and Garbine wanted to win. That’s a huge difference in sports.

She has great groundies, a good serve can volley when needed and chooses the correct shots to hit, as was demonstrated on the topspin lob on match point. Perfect shot selection there and she didn’t have to think about it, it came naturally. You will see this girl at the top for many years to come.

Now time to talk about a guy who took a while to get to the top but is certainly in his “Prime” now. Did you hear that only two other guys have been defending Champs in all 4 majors at the same time, and the other 2 were Laver and Don Budge? That’s pretty rarified air right there.

Let’s bring in Lebron again. It’s takes accomplishments like this to be called “The King”, not 2 titles in 13 years. What a feat. There has a few players who could win 3 but Roland Garros is always the toughest. Things broke right for Novak this year but you had to know it was never in doubt once he got to the Final.

We were kinda rooting for Murray and the odds were better at America’s Bookie, but we knew Djokovic would win this match. Even in the live betting dept, when the odds on Murray winning the match were +135 after taking the first set, you still smelt trouble. We were about to pull the trigger but we said to ourselves “Novak is gonna win the second set and then come back and win this thing”. It was obvious.

Novak just got a call from the Geico commercial guys and they want him to do a piece for them saying, “If you are Novak Djokovic you win tennis matches, it’s what you do”. The funny thing is he really doesn’t do that much. There is an old saying in tennis that in order to win just hit the ball over the net one more time than your opponent. That’s what he does. He’s kinda like a “pusher” but he hits with pace.

I was watching him play and said to myself “He plays a lot like Mats Wilander one of my old favorites, he never misses, but he can put the ball away when he has too, something that Wilander never did”. I patterned my “2 fister” after Mats and it hurt me cuz although I never missed; I never hit winner with it as well. Djokovic will roll his back hard and deep but when it’s time he puts the ball away, on not only his backhand but his forehand as well. When you combine power and consistency in any sport you have a pretty hard to beat combination.

This week we start the 3-week grass court prep before we go to Wimbledon. The first 2 tourneys are in Stuttgart and Holland. We like the way they now give the guys an extra week to adjust. We have winner for you as well in Hertogenbosh. It’s time to start betting the big dorky guys with big serves who end points quickly. The odds however on Querry over Becker are a bit high, so take Becker who plays well on Grass and has already played a challenger last week to adjust +1.5 sets -130, against a guy who has lost 4 straight matches in Querry. See you next week guys.