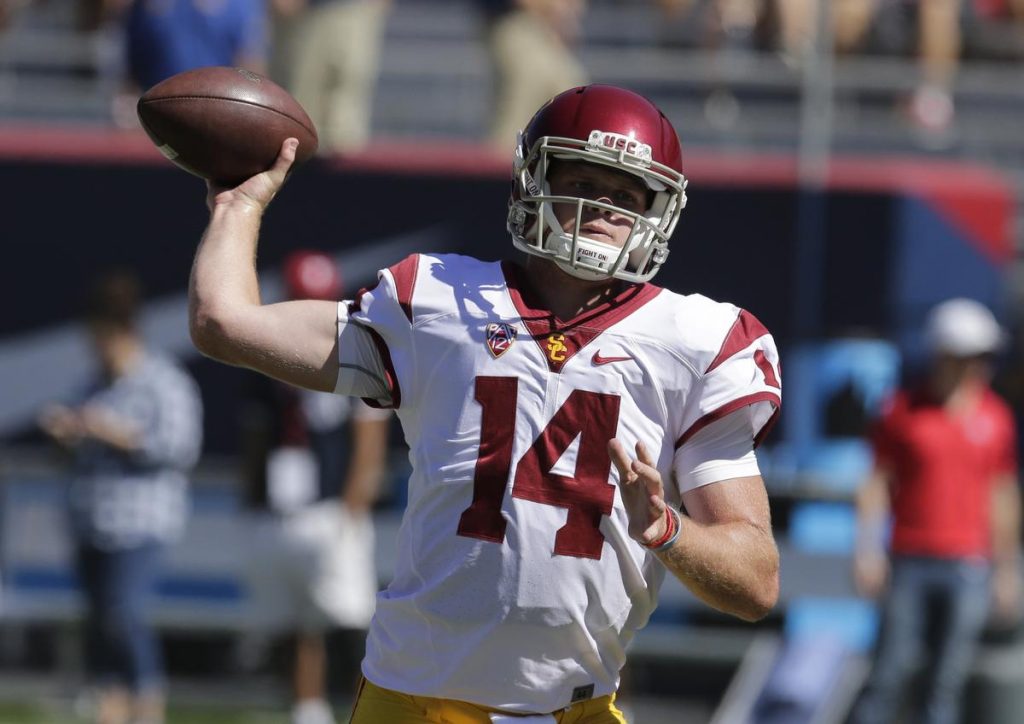 The USC Trojans seemed to catch lightning in a bottle when they made the switch to a freshman quarterback, and they built a tremendous winning streak. They hope to continue with that momentum as they meet up with the Penn State Nittany Lions in the Rose Bowl, scheduled to start at 5 PM ET at Rose Bowl Stadium in Pasadena. ESPN will televise the game, and America’s Bookie customers are lucky, because they have the opportunity to access not one, but two different “Live Betting” options in order to further their enjoyment.

Sam Darnold was sitting behind Max Browne, at one point a real hotshot high school recruit, but then, as Browne was not moving team all that well against Utah, coach Clay Helton made the bold move by putting the freshman in the game. What Darnold has done ever since has been astounding. He’s thrown 26 touchdown passes with only eight interceptions, connecting on 68% of his throws, and he ranks 10th in the nation in passing efficiency. Best of all, his team has not lost one game that he has started. And that includes a very decisive 26-13 victory over Washington, which eventually won the Pac 12 and went on to the four-team college football playoff.

Penn State is also on a long winning streak. They were humbled by Michigan in the fourth game of the season, hitting only 191 total yards in a 49-10 blowout defeat, but then they rallied behind quarterback Trace McSorley, who had an outstanding ratio of 25 touchdowns to five interceptions and an average of 9.4 yards per attempt. They have now won nine games in a row, going 8-0-1 against the football pointspread. And along the way they won the Big Ten championship game over Wisconsin, which at least made decent case for them to be included in the playoff. Remember that they pinned the only regular-season defeat on Ohio State, working some special teams heroics to pull out the 24-21 victory.

In the college football betting odds that have been posted on this game, USC is favored by a touchdown:

On the surface, you might be asking why a team with as much in the way of credentials is Penn State would be getting a full touchdown in this game. Actually, that’s a legitimate question, but in this particular situation, USC might be the way for us to go. For one thing, we know that they have great team speed on defense, while Big Ten squads have made a habit of suffering in that department. We’ve seen it already during this bowl season, as conference heavyweights like Ohio State and Michigan have gone down to defeat.

Also, were not all that impressed with Penn State’s conversion rate on third down, which is only 32% and ranks 120th in the nation. USC, by way of the matchup difficulties it creates with its pair of outstanding cornerbacks – Adoree Jackson and Iman Marshall – might be able to stack up against the run a little more than usual, and that would put McSorley into disadvantageous down-and-distance situations.

Also, it’s going to be tougher for Penn State to put a lot of pressure on Darnold, who was sacked only five times. This is a big and talented offensive line, and they were able to do a little plug-and-play with their running backs, putting Ronald Jones into the lineup when Justin Davis went down with an injury. Jones produced 6.5 yards per carry and 1027 yards overall.

We can obviously throw USC’s 52-6 loss to Alabama out the window, because they became a whole new team when they had the freshman under center. By the same token, Penn State should not be judged on their lopsided loss to Michigan, because they rebounded to do an awful lot. What is worrisome about the Nittany Lions is that they have come back and played so well in the second half in so many games, for example, outscoring Rutgers 30-0 and Michigan State 35-0, and then capping it off with a comeback against Wisconsin after being down two touchdowns at the half. Clearly they are able to make adjustments. But in every game but the two they lost – to Stanford and Utah – USC has been ahead at the half. And were not sure that with an offensive unit triggered by someone as proficient as Darnold, that it would be as easy for Penn State to play catch-up in this one. Were laying the points with USC, as the Charles Jay/America’s Bookie Challenge continues.