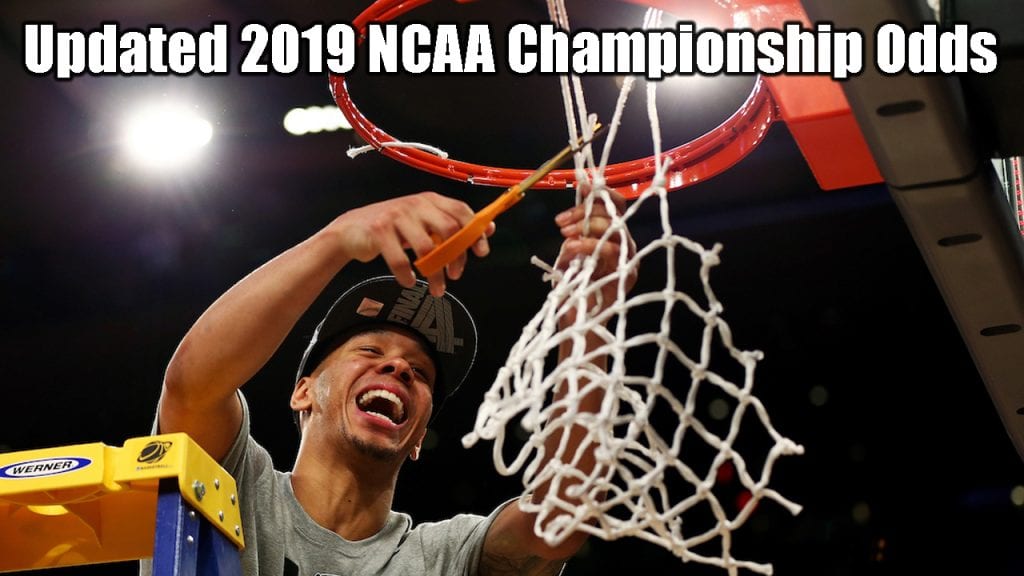 The 2018-19 college basketball season is in its final few weeks and that means March Madness is just around the corner. The favorite to capture this year’s NCAA tournament championship has been Duke, and the Blue Devils are still in the driver’s seat checking in at +175. It will be interesting to see how the recent injury to star Zion Williamson affects Duke down the stretch.

A number of the usual suspects – Gonzaga, Kentucky, Virginia, and North Carolina – are still frontrunners to capture a title. There are also plenty of upset opportunities and somewhere in there is sure to be another Cinderella like last year’s Loyola-Chicago. Here’s a look at the latest odds.

Still haven’t got your NCAA basketball future bets in, check out the current college basketball odds at 1Vice.

Head coach Mark Few, who has taken Gonzaga to 20 straight NCAA tournaments, has a strong lineup that features 6-8 junior Rui Hachimura who averages 20.5 points and 6.7 rebounds per game. Brandon Clarke scores 16.5 and Zach Norvell Jr. adds 16.1 per game. Gonzaga is deep, talented, and has done it all without their best player, Killian Tillie, for most of the season. Tilllie tore a ligament in his foot earlier this year and played in just nine games.

Like Gonzaga, Virginia has just a pair of losses, both of which happen to be to Duke. Tony Bennett’s team is once again the best in the nation on defense allowing opponents just 54.5 points per game. The Cavaliers were a No. 1 seed last season and became the first to ever lose to a No. 16 in last year’s first round of the tournament. Don’t expect that to happen again.

Kentucky lost its first SEC game to Alabama back in early January and checked in at +2000 to win the NCAA title. Fast forward to the end of February and head coach John Calipari’s squad has just one loss (No. 13 LSU) in 14 games. The Wildcats are 23-4 and recently pounded a then-No. 1 Tennessee 86-69. Kentucky, now at +850 to win it all, has one game left with the Vols (+950) before the SEC tourney and you can bet Calipari will have the Wildcats ready for a deep postseason run.

Like Kentucky, blueblood North Carolina (+1150) has come on strong lately. The Tar Heels have won 10 of their last 11 games including a huge win at Cameron Indoor Stadium over then top-ranked Duke. North Carolina has scorers in Cameron Johnson (16.7 ppg) and Coby White (15.2 ppg), experience in Luke Maye (15.1 ppg, 9.9 rpg), and young explosive talent in freshman Nassir Little. Remember, the Tar Heels are just two years removed from their last NCAA championship.

Back to the Final Four?

It’s entirely possible the Michigan Wolverines return to the Final Four. The Wolverines won their first 17 games of the season and are now 24-4 and ranked ninth. Head coach John Beilein has his team playing phenomenal defense – 58.4 points per game allowed, third-best in the nation. Ignas Brazdeikis (14.4 ppg) is a budding star. Zavier Simpson (9.3 ppg, 6.0 apg) is the catalyst that makes the offense go and Charles Matthews (12.8 ppg, 5.1 rpg) spurned the NBA for another shot at a title.

Michigan recently lost to in-state rival Michigan State and still faces the Spartans (+1150) and No. 17. Maryland (+4500) before the end of the regular season. Last year’s other entrants Kansas, Loyola-Marymount, and defending champion Villanova are interesting bets this time around.

Kansas and Villanova both check in at +2000 and both would have to get really hot at the right time to capture this year’s title. Loyola comes in at +12500 and is going to have to win the Missouri Valley Conference tournament again to even get into the NCAA tourney. The Ramblers are just 17-12 on the season.

This year’s Cinderella might be wrapped up in the American Athletic Conference. Houston (26-1) and Cincinnati (23-4) are the two best teams in the AAC. Head coach Kelvin Sampson has the Cougars playing as good as any team in the country. Houston is fifth in points allowed per game (60.5) and they have beaten Cincy once already this season. That is one reason why the Cougars’ odds to win this year’s title are currently at +3500.

The Bearcats will play Houston on Mar. 10 to close the regular season. Cincinnati is also strong defensively (61.5 ppg allowed). The Bearcats haven’t allowed an opponent to score more than 68 points in a game since January 15. Cincinnati (+5500) or Houston could be that sleeper that sneaks into this year’s Final Four.

Here are the most recent updated odds to win the 2019 NCAA men’s basketball championship: