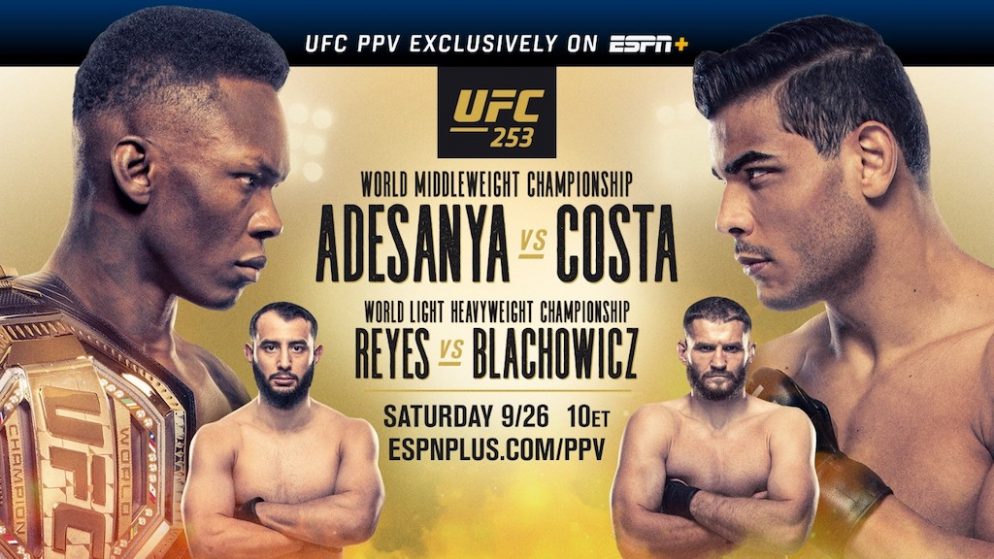 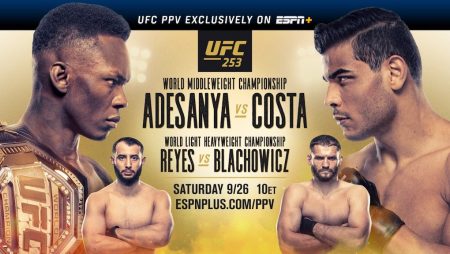 I got you covered for today’s UFC 253 free pick. The UFC is on pay-per-view tonight and will be coming to us live from Fight Island.

There are two title fights scheduled for the UFC 253 main card.

In the main event, Israel Adesanya (19-0) will fight Paulo Costa (13-0). Both fighters come into this fight undefeated, but that’s going to change unless we have another draw this week.

Costa only joined the UFC in 2017 and he’s 5-0 since joining the promotion, while Adesanya joined the UFC 2018 and has already rallied off eight consecutive wins in less than three years.

When this market opened up initially, Adesanya was only a -140 favorite at America’s Bookie. If you jumped on him then you’re doing great, but even Adesanya at -180 is worth a moneyline bet tonight.

My best bet will come from the round total. This is a five-round championship fight and while these two both have a lot of power in their hands, my money is on this fight going into the third round.

Adesanya vs. Costa – Tale of the Tape

Adesanya has more wins and against better opponents. Both fighters are coming off a win against Romero, but the similarities end there. Adesanya has also defeated Silva, Gastelum and Whittaker.

Can you believe that neither fighter has landed a takedown in the UFC? What will that do for my UFC 253 free pick?

Costa actually has a wrestling background, but he hasn’t utilized it yet. That may change in this fight, as he needs to find ways to close the distance to land strikes on the current champion.

That should allow him to keep his distance and pick Costa apart with his technical ability.

He Got the Power?

Adesanya has 14 TKO/KO wins, but he’s not the most powerful middleweight. Costa has more power in his hands (11 TKO/KO wins) and he has knocked out four of his five UFC opponents.

Is he going to come out gunning or will he look to take his time? My money is on Adesanya to come out and maintain his distance in the first couple rounds before looking for the knockout.

He’s going to need Costa to gas if he wants to finish him.

Costa has averaged 8.43 SLpM and 6.84 SApM. He comes out slugging, but he eats a lot of shots as well. That’s not a good sign, as Adesanya has technical striking.

Adesanya averages 3.96 SLpM and 2.40 SApM. He doesn’t throw nearly the volume, but he has way better striking defense because of his long reach and how hard it is to tag him with a shot.