The Antonio Brown Saga: Betting on the Prima Donna 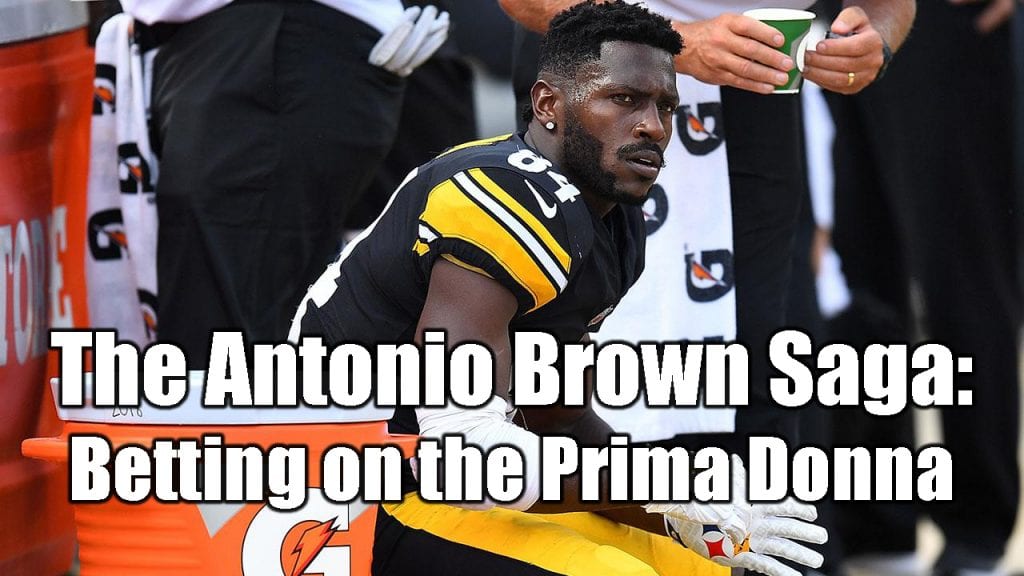 There is no doubt Pittsburgh wide receiver Antonio Brown is one of the NFL’s best. He has produced 100-plus receptions and 1,200-plus receiving yards in six straight seasons. Still, Brown caught the ire of his teammates and Steeler fans when he decided to skip a Saturday practice before Pittsburgh’s final regular season game against Cincinnati.

As a result of the skipped practice, Steelers head coach Mike Tomlin benched Brown for the game against the Bengals. The Steelers won anyway but still missed out on the postseason after finishing the season 9-6-1. Now, the organization is up in arms as to what to do with Brown. Will he be traded? Cut?

Time will tell, but one thing is certain. Handling a player of Brown’s talent and persona is a difficult task … for anyone.

The son of former Arena Football League star Eddie Brown, Antonio did not qualify academically to play FBS football coming out of high school. He went to a prep school and then accepted a scholarship to play at Florida International. That didn’t work out as Brown was expelled for an altercation with campus security.

Butch Jones had recruited Brown and when Jones took the head coaching job at Central Michigan, Brown followed as a walk-on. Brown had trouble adapting to the college lifestyle. He was late for meetings and practice and it wasn’t until WRs coach Zach Azzani took Brown under his wing that he improved.

Brown caught 305 passes for 3,199 yards and 22 touchdowns in three seasons at CMU. He entered the 2010 NFL Draft and Pittsburgh took him with a sixth-round pick. Brown made the Steelers roster as a rookie as the team’s fifth wide receiver. He only had 16 catches his rookie season. He started to pick up in his second season when he registered 69 receptions for 1,108 yards despite only starting three games.

Starting with the 2013 season, Brown has never had fewer than 101 catches and 1,284 yards. His 15 touchdown catches last year led the NFL. There is no question that Brown can produce.

If you have never participated in a summer/fall training camp at most any level, you might not understand the problem with Brown. Pittsburgh Steelers report to St. Vincent College in nearby Latrobe, Pa., for their annual training camp. Players move into the small and stuffy dorm rooms for a month of preparation for an upcoming season. For the most part, the stay is less than desirable.

For Brown, training camp has been wonderful. He has been seen in the past being dropped off to St. Vincent in the mornings in a luxury sedan or SUV. This would be because he does not stay in the dorm rooms at St. Vincent. Brown rents an Airbnb home for training camp. Prima donna evidence No. 1.

Several teammates report that Brown repeatedly shows up to meetings late. During one season, a Steeler commented that he didn’t remember Brown showing up once on time to a Wednesday morning meeting. Players are fined for being late or missing meetings. Brown, who gets the star treatment from everyone including Tomlin, has been fined, but the penalties are neither consistent nor enough. A $1,000 fine for a player with a $73 million contract leaves him unfazed.

How to Handle the Prima Donna

Brown is a likable personality. He appeared on Season 22 of Dancing with the Stars and finished fourth. Teammates comment that it’s hard not to like Brown despite all of his shortcomings. So, what do you do? How do you handle a prima donna like Brown?

There are plenty of examples from the past. Think back to Deion Sanders, Terrell Owens, and Chad Ochocinco (or Johnson or whatever name he is using these days). All of these players had big egos and were full of themselves. Each one was pretty good too. They were All-Pro type players that could change the course of game just by themselves. Brown is the same.

As a coach or even a teammate, handling a prima donna is extremely difficult. There shouldn’t be any special treatment for a player, but sometimes there just has to be. Some players – like Brown and the others mentioned – are simply too valuable to the number of wins and losses in a single season. Bettors should pay attention to where Brown ends up next season. He has already hinted at San Francisco tweeting a photoshopped picture of himself in a 49ers uniform.

If you don’t think he will make a difference wherever he plays, consider the Steelers’ season finale against Cincinnati. Without Brown, Pittsburgh did not score on its first four drives of the game and struggled to beat the 6-10 Bengals 16-13. In the first meeting with Cincy, Brown caught five passes for 105 yards including a 31-yard scoring reception that proved to be the game-winner in a 28-21 victory. Smart wagers on games like this can net a great profit.