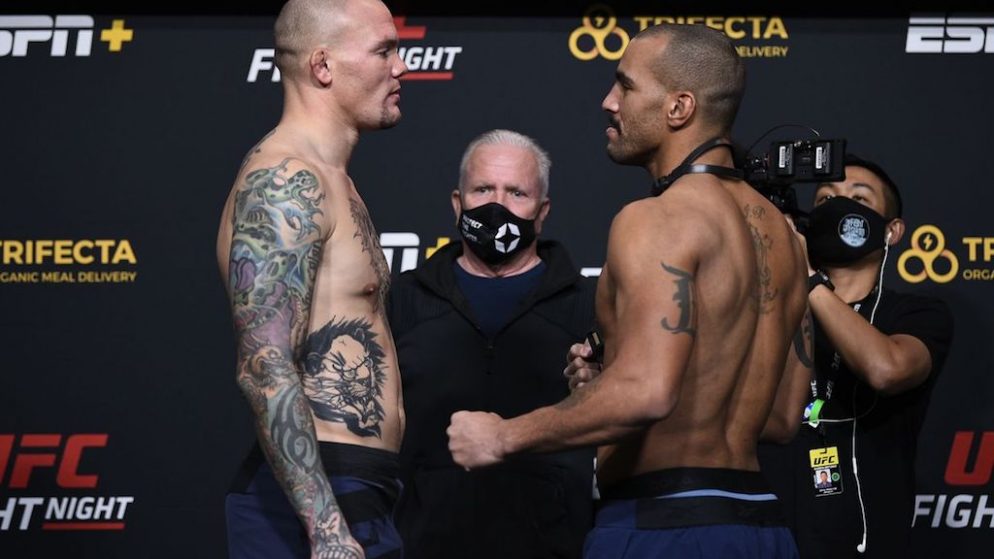 Tonight’s Smith Clark free pick comes from UFC Vegas 15. It is tonight at the UFC APEX facility in Las Vegas.

Initially, I was extremely excited for this event because of the main event. Curtis Blaydes was going to fight Derrick Lewis in the main event, but the fight had to be cancelled yesterday.

I’m definitely not as excited about this fight, but there’s some value from a betting perspective. But before we move on, check out last week’s winner, my Figueiredo Perez free pick.

Smith opened up as a -161 favorite earlier in the month, but he has been bet down. The two veterans are close to each in talent, but this is definitely a step up for Clark.

The public expects this fight to end by stoppage. My Smith Clark free pick won’t be on this market. Both fighters can finish fights, but Clark has been winning a lot of decisions as of late.

Clark only has 3 TKO/KO wins and 1 submission win in his career. None of those were in the UFC. He has a 6-4 UFC record and all of his wins have come by three-round decision.

Clark was stopped in all four of his losses and has been knocked out twice and tapped out twice.

Smith has 18 TKO/KO wins and 12 submission wins. He’s a finisher and has been a busy fighter too. Smith has gone 4-4 since 2018 and he has lost three of his last four fights.

He tapped out Gustafsson last year, but other than that he has struggled against the top fighters in the light heavyweight division. Clark needs to win this fight if he wants to climb the ladder.

Smith vs. Clark Tale of the Tape

Will Clark be able to continue climbing the LHW ladder with a win?

It’s going to be an extremely tough task. Clark hasn’t fought the same level of competition as his opponent. Sure, Smith has taken some losses, but he hasn’t looked bad in those fights.

Clark will have a grappling edge. He averages almost one takedown per round and Smith only has 51% takedown defense. Clark will likely be able to take Smith to the mat.

However, Smith can lock in submissions from a lot of positions. Clark has been tapped twice in the UFC already. Smith also has a striking edge and way more power than his opponent.

We’re getting a great price on Smith to win this fight.