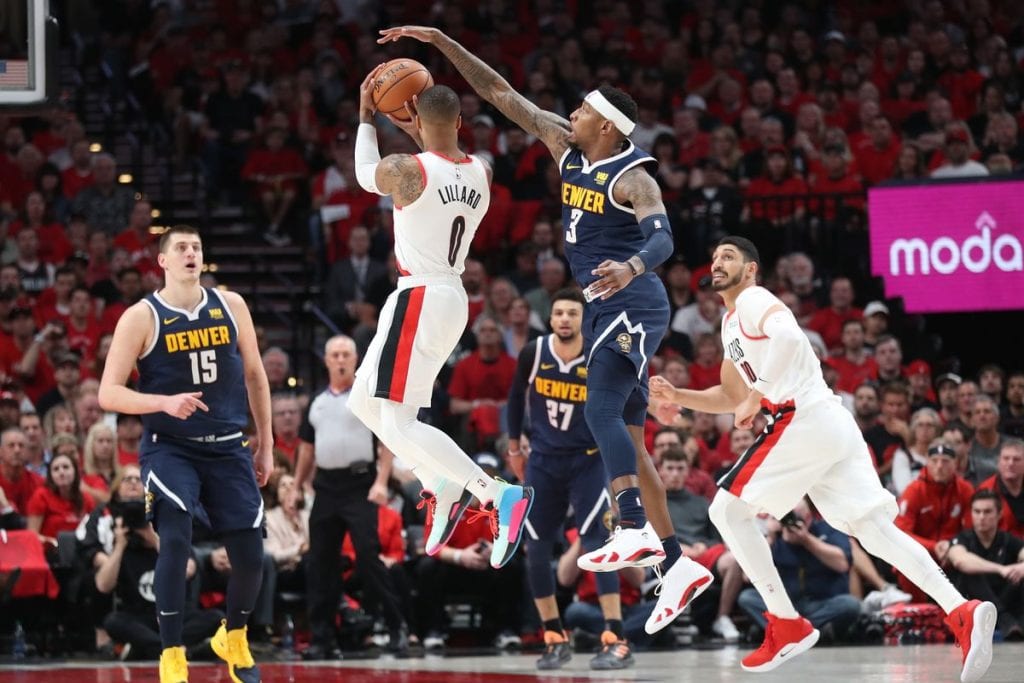 The one thing we know about Portland is this, without Damian Lillard, they are nothing. Now this isn’t exactly earth-shattering news, but it is what it is and the number one job for the Nuggets tonight in game five, is to stop him. The bad news for the Nuggets, Lillard is scoring 25.9 points on the road.

FIND AN ONLINE SPORTSBOOK TO WAGER ON THE PLAYOFFS

The Nuggets did their job and it wasn’t easy! They went into Portland and picked up a huge game four win. Here is the kicker, the Nuggets should be up 3-1 in this series and they would be had it not be for a nutty, 4-overtime game on the 3rd. This one ended up in Portland’s favor, 140-137 and the series return to Denver tied.

Denver has proven they can win on the road and as they look for their first conference championship in ten years, they need this win tonight. Portland has also proven they can win in Denver and they did just that with a surprising defensive attack in game two that saw Denver score just 90 points.

The Nuggets must get out of their own way, and they did, to a point. However, it seems that Denver gives up a lot, to get a little and game two was just that, as they gave up 20 points to CJ McCollum. Really, they have to double team McCollum? Maybe Lillard is not the key for Portland. The argument says otherwise with his 34 points in game one, but it comes along with a victory –121-113. How does this happen? How does the opposition pick up a win when their best player pours in 34? They double team McCollum… they allow him nothing.

We have another expert opinion on this game in the Schwab’s weekly Dogs Ready to Bite the Books article.

This strategy may work, and it may not, and one thing we would suggest, (and by the way, we haven’t got the phone call as of yet, asking us for game planning advise!) Don’t double team anybody. Play a balanced attack such as the Rockets have done against Golden State.

We understand that it worked in Game one, and we give the nuggets all of the credit for the win, but come on, it was game one of the home-opener, in a round-two playoff series—the Nuggets had better get the win.

The Nuggets must keep the momentum going tonight. They must play shut down defense but play a spread defense. Lillard has averaged 28 points at home, keep him under 25 tonight and they have a chance. The last thing Denver wants to do, is go back to Portland in need of a win. They must win tonight!

Teaser: Nuggets & the OVER