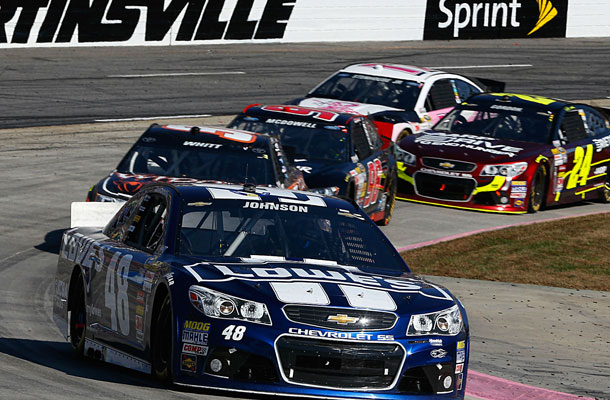 NASCAR is heading to the Martinsville Speedway for the STP 500. This is generally a wide-open race and any of the top drivers could end up winning. In the last five years we’ve seen a different driver win the STP 500, which is quite rare in NASCAR.

Four drivers are paying under 10/1 in the outright market, including Jimmie Johnson, Kevin Harvick, Jeff Gordon and Denny Hamlin. I also think a few of the drivers paying over 10/1 are in with a good shot to win at the Martinsville Speedway this weekend.

In the last two years there have been four races at Martinsville and Jimmie Johnson (4/1) has the best driver rating (123.3). He has raced on this track 26 times in his career and he has eight victories, plus he has only finished outside of the T10 three times.

Kevin Harvick (6/1) is having a great start to the season, but apart from winning this race in 2011, he hasn’t done well. He has an average finish position (AFP) of 16.44 at Martinsville, including four finishes outside of the T10 in the last six races on this track.

I hate Harvick this week, but Jeff Gordon (6/1) will be in consideration. Gordon ranks second in driver rating (115.5) in the last two years on this track. In that time he has finished in 3rd, 1st, 12th and 2nd place. In his career he has an AFP of 6.84 at Martinsville.

Denny Hamlin (8/1) isn’t a driver I’m considering either, as he’s priced way too short based on his track form. He had a run of three wins on this track in 2009-2010, but since 2011 his best finish is 5th place and he hasn’t even sniffed the podium.

A long shot that’s going to be targeted often will be Matt Kenseth (22/1). Kenseth struggled throughout most of his career on this track, but in the last three races he finished in 2nd, 6th and 6th place. He has led laps the last four races here as well.

Dale Earnhardt Jr (12/1) did very well last year at Martinsville, as he had finishes of 3rd place and 1st place. The problem I have with Kenseth and Earnhardt Jr is both drivers have been struggling as of late this season and they’re unlikely to keep the pace.

I’m rolling with Johnson, despite being a short priced favorite. I don’t like anyone else in the outright marker this week and I believe he has the best shot at winning. His car has been good this year and he has always been a top contender at Martinsville.