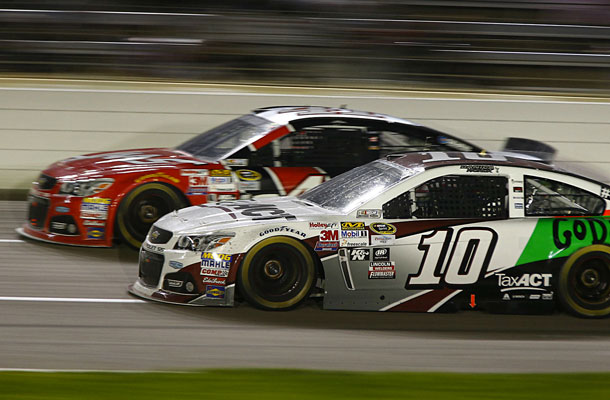 Denny Hamlin stole the show at Martinsville two weeks ago to win the STP 500. Drivers were off for the Easter holidays, but will be back in action on Saturday night at the Texas Motor Speedway, as the 2015 Duck Commander 500 will be raced under the lights.

Bet on every NASCAR race at America’s Bookie.

Three drivers are paying under 10/1 odds and Kevin Harvick is favored to win the race in Texas. Jimmie Johnson and Kurt Busch are right behind Harvick in the outright winner market. Get the best odds on the 2015 Duck Commander 500 at America’s Bookie.

Kevin Harvick (4/1) finished in 2nd place last November in Texas, but he hasn’t had much success on this track. He has never won on this track in 24 career races and in all of those races he has only led eight laps. I’m shocked he’s a 4/1 favorite to win.

Out of the favorites – Jimmie Johnson (6/1) is the best bet. Johnson has four career wins at Texas, including three wins in the last five races. All three wins came in the November races at Texas. In fact, he has never won the April in Texas, which is strange.

I’m rolling with Joey Logano (11/1) this weekend. Logano is having a great season again, as he has finished in the top ten in every race, including a win in the Daytona 500. Logano also has great track form – he ranks 3rd in driver rating (109.6) the last two years.

Logano won this race last year and since moving to Penske in 2013, his performances in Texas have been great. He has finishes of 5th, 3rd, 1st and 12th since joining Penske on this track. I’m surprised we’re getting 11/1 on Logano, but I’ll take those odds.

Kyle Busch would have been the most popular pick this week if he was racing, but he isn’t. Due to that, this race will likely be won by Logano or Johnson. Both have consistently raced well here in recent years whereas other drivers have struggled with consistency.

There are six drivers bunched up in the market between 12/1 and 15/1 odds. Brad Keselowski, Jeff Gordon, Matt Kenseth, Dale Earnhardt Jr, Denny Hamlin and Martin Truex Jr. are all packed together, but none of them really stand out to me in the market.

Keselowski is the best out of that bunch, as he has finished in the top ten in four consecutive races in Texas. He has a 2nd and 3rd place finish during that time and he’ll likely finish in the top five, but I believe Logano has the better shot at taking the flag.