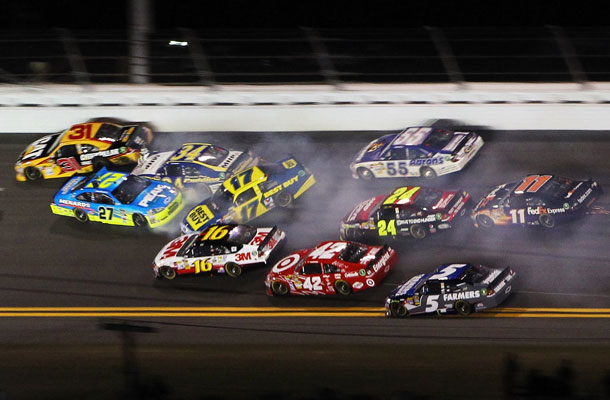 NASCAR is heading to sunny Phoenix, Arizona for the CampingWorld.com 500 at the Phoenix International Speedway. Kevin Harvick ended up winning the Kobalt 400 this past weekend and he’s a huge favorite to win again this week in Phoenix.

Odds to Win the CampingWorld.com 500

Bet on every NASCAR race and get the best odds at America’s Bookie.

The sportsbooks all agree that Kevin Harvick should win the race and he’s an overwhelming favorite in Phoenix. I hare betting on a driver when he’s priced so low to win a race, but it’ll be tough to make a case to bet against Harvick on this track.

Kevin Harvick (2/1) has won the last three races in Phoenix and a total of six races in his career at this track. He led over 275 laps in the two races on this track last year. He was unstoppable last year in Phoenix and there’s no reason to believe he won’t again.

If you’re looking for more value you could consider Carl Edwards (15/1) – the only other driver to win here in the last two years. He won this race two years ago, but since then his best finish has been 8th place in three races. His odds are nice, but he won’t win.

Brad Keselowski (9/1) and Dale Earnhardt Jr (10/1) are two other options in Phoenix, as both drivers have finished in the top 5 in three out of the last four races on this track. Since 2012, Keselowski has four top 5 finishes – with his worst finish being 11th place.

Jeff Gordon (9/1) is amongst the favorites this week, but there is no way I’d bet on him at these odds. He has really struggled out of the gate in his final full year driving. He finished in 5th place and 2nd place last year in Phoenix, but I recommend avoiding him.

Another candidate to win is Jimmie Johnson (9/1) who over his career has done great in Phoenix. Johnson has won on this track four times, but the last time he won was in 2009. Last year he finished in 6th and 39th place, plus he didn’t lead a single lap in either race.

Denny Hamlin (12/1) also has done well at Phoenix in the past. Hamlin won this race in 2012 and he has finished in the top 5 in four of the last six races on this track. There is no denying his track form and he’ll be in with a shot to win at the end of the race.

This is a wide-open race that could really be won by numerous drivers, despite the fact that Harvick has won the last three times on this track. I’m betting on Earnhardt Jr to get his first win of the year and I like the fact that he’s priced at 10/1 odds.