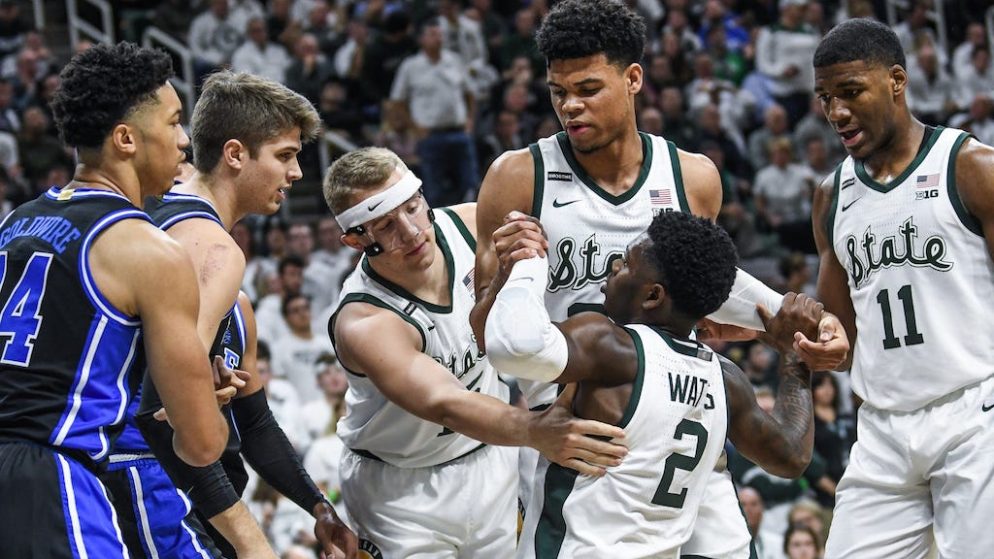 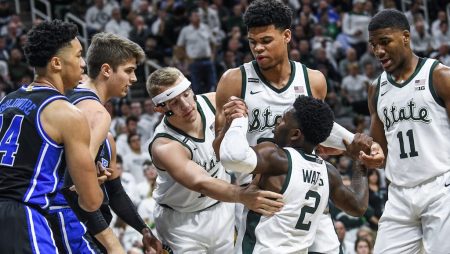 Have you caught any of the early college basketball action yet? If not, today’s the day and here’s a Michigan State Duke pick.

There are a few awesome games on the slate today. We’re going to preview the top 10 showdown between the (#8) Michigan State Spartans and (#6) Duke Blue Devils.

Both teams are undefeated to begin the season, but we’re just getting started.

Due to COVID-19, we’re going to see some unique events. Starting today, the ACC-Big Ten Challenge will get underway and we’ll be treated to an early game between two top 10 teams.

Duke opened the season against Coppin State and cruised to a win (81-71). The final score is a little deceiving, though, as the Blue Devils dominated the opening half and were up huge.

MSU is off to a hot start. They defeated EMU (83-67) to begin the season and then they picked up a win against Notre Dame (80-70). This will be the first real test for both of these teams.

The Spartans are going to need to work as a unit. After the first two games of the season, MSU have four players averaging between 10.0 PPG and 12.5 PPG. Joey Hauser leads the way with 12.5 PPG.

On the Blue Devils, DJ Steward exploded for 24 points in the opening game. Jalen Johnson had a monster game as well. He scored 19 points and grabbed 19 rebounds.

That was against Coppin State, though, what will they do against MSU?

Since 2010, Duke are 8-1 against Michigan State. They’re 5-3 ATS during that span. Five of the last six head-to-head games have also gone over the game total.

Johnson is only a freshman with one game under his belt, but he dominated in his debut.

I’m interested to watch him tonight to see how he does against a powerhouse program like MSU. You can bet Tom Izzo is going to draw up some plays to put pressure on the freshman.

Duke also struggled with turnovers in their opener and need to clean that up fast.

However, MSU aren’t a team that’ll put up 80+ points very often this season. They’ll try to wear down teams, but the Blue Devils have the talent to pull this out at home.