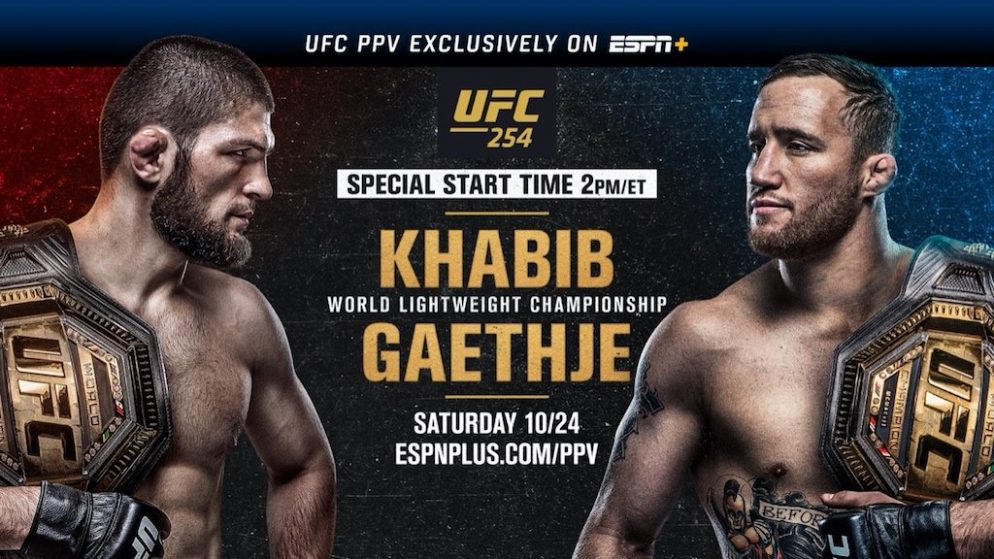 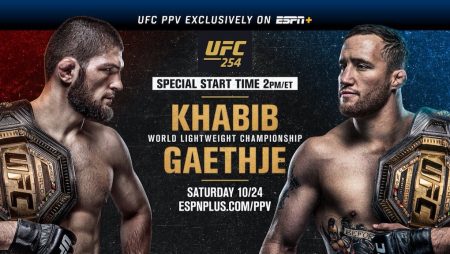 The UFC is back on pay-per-view (PPV) tonight from Fight Island. From it comes my Khabib Gaethje free pick.

The main event will feature one of the most anticipated fights in a long time.

Khabib Nurmagomedov will put his UFC lightweight title on the line. Justin Gaethje is the challenger and this will be the toughest challenge the Russian has likely had in the UFC.

Nurmagomedov has defeated the best already, including Conor McGregor, but Gaethje appears to be hitting his prime. The American has powerful striking and insane leg kicks.

Khabib vs. Gaethje – Tale of the Tape

The Eagle is undefeated and hasn’t come close to losing yet. Gaethje was knocked twice not too long ago against Eddie Alvarez (2017) and Dustin Poirier (2018).

He won all four of those fights by TKO/KO with the first three wins coming in the first round.

I never bet on big favorites straight-up, but Nurmagomedov will be on my UFC 254 parlays. I guess a lot of bettors expect Gaethje to catch Khabib slipping and win by knockout.

That’s the only way that Gathje will win this fight.

There aren’t too many handicappers that expect this fight to go the distance. Nurmagomedov does have 10 decision wins, but he has stepped up with submissions in his last two victories.

He submitted Mcgregor in the fourth-round in 2018 and Poirier in the third-round last year.

My best bet in this fight is Nurmagomedov inside the distance (ITD) at -115 odds.

He has been finishing his opponents lately again. Gaethje has been knocked out twice previously and Nurmagomedov is a beast. He’s extremely fast and rangy.

Once he wraps around Gaethje, there’s nothing the American will be able to do.

I expect Nurmagomedov to win this fight by submission, but we’re getting a good line on ITD and he could win by TKO/KO. His hands are getting better and he does have 8 TKO/KO wins.