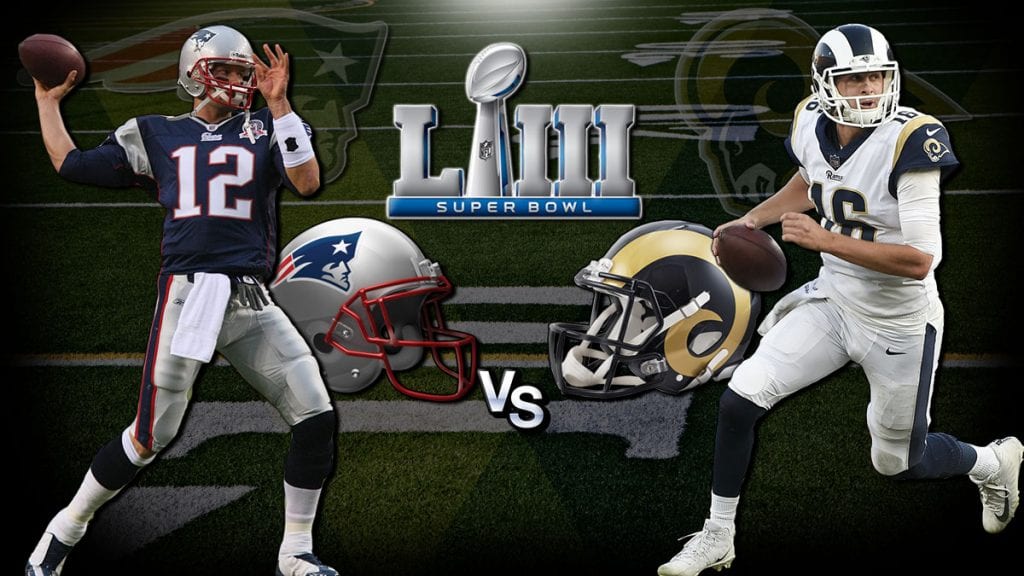 It is the dream of every youngster who ever strapped on the pads. They fantasize about one day playing in front of thousands of fans in hopes of capturing football’s ultimate goal – a Lombardi Trophy signifying a Super Bowl victory. It is a difficult task playing in a game of this proportion. How do players manage playing in one like the Super Bowl? Very carefully.

Of all the distractions during the week of the Super Bowl, the fewest come from direct contact to the media. ESPN, newspapers, and other news outlets will spend hours covering the Super Bowl, but players and coaches spend relatively little time speaking with the media.

On Monday Jan. 28, both teams – New England and Los Angeles – were available for Super Bowl photo and interview sessions at State Farm Arena. The Rams were there from 7:10 p.m. to 8:10 p.m. and the Patriots from 9 p.m. to 10 p.m. On Tuesday, both head coaches – Bill Belichick and Sean McVay – and a few select players were available to speak to the media. The Patriots were available between 12:40 p.m. and 1:30 p.m.

On Wednesday and Thursday, both teams were to meet with the media for one hour and ten minutes. All players and coaches were available. On Friday and Saturday, there are no media availabilities for either team. In the end, very little time is spent by a player with the media during Super Bowl week.

The extra week off

The NFL gives its Super Bowl teams an extra week to prepare for the upcoming Super Bowl. Teams stay in their respective cities and continue with business as usual for the first week. Teams will then head to their Super Bowl destination the Sunday before the game.

Our prognosticators have also had an extra week to prepare for betting on the Super Bowl. Check our ATB Pick of the Day page for free Super Bowl betting picks.

As soon as the conference championship games end, players’ phones begin to light up. Family members and friends are looking for Super Bowl tickets. What many people do not realize is that those tickets are not free. Players receive anywhere from 10 to 15 tickets for the game depending upon their role with the team. And the players pay for those tickets. Some will spend upwards of $15,000.

Families begin to arrive Thursday before the Sunday game. Players tell their friends and family members that they will have limited access to them when they come in town. Most teams now have a football operations department that handles any friend/family requests. Players give their family and friends a phone number – that of a football operations person – if they need to get in touch. Otherwise, they see their player when they see him.

On the eve of Super Bowl XXXIII, Atlanta head coach Dan Reeves was just about ready to get a good night’s sleep when his phone rang. His safety, Eugene Robinson, had just been arrested for soliciting a prostitute. Robinson would play the next day but would get burnt badly on an 80-yard touchdown pass. The Denver Broncos would win 34-19.

Did the distraction cost the Falcons a Super Bowl? It surely didn’t help. Teams that can minimize the distractions usually have a better shot at capturing a Lombardi Trophy.

Philadelphia Eagles head coach Dick Vermeil took steps to prevent distractions. His team stayed at a hotel near the airport far away from the temptations of Bourbon Street in New Orleans, that year’s Super Bowl host. In an era (1981) before cell phones and other mobile devices, Vermeil had all the phones shut off in his players’ rooms at 10 p.m. each night.

As fans, we tend to think of professional football players as some of the toughest people on the face of the Earth. There is no doubt that they physically fit, but when it comes to managing emotions – especially those surrounding an event such as the Super Bowl – pro football players are just like us. They experience the same performance anxiety as a sales manager, a bank president, or an electrical engineer developing new automobile technology.

As much as the Rams and Patriots want to stay focused on Super Bowl LIII, they simply cannot. It is not “just another game.” It’s the Super Bowl. The Patriots have been there before; the Rams have not. Does New England have an advantage in this category? Yes, but sticking to a routine – as much as possible – leading up to the game helps players stay mentally and emotionally focused.

In the end, the media and the extra week off don’t have much of an effect on players in the Super Bowl. Families can be a distraction, but more teams are trying to minimize that. Some distractions just can’t be avoided. Players are going to face pressure. Some manage it better than others.

New England has been here before, many times before. The Rams are young and inexperienced in games of this magnitude. Will it make a difference? Maybe. One thing to consider though is that of ten previous Super Bowls – not counting Super XLIX since the line was a pick’em – the underdog has won eight times. New England is a 2.5-point favorite.