Dogs Ready to Bite the Books: Thunder at Rockets 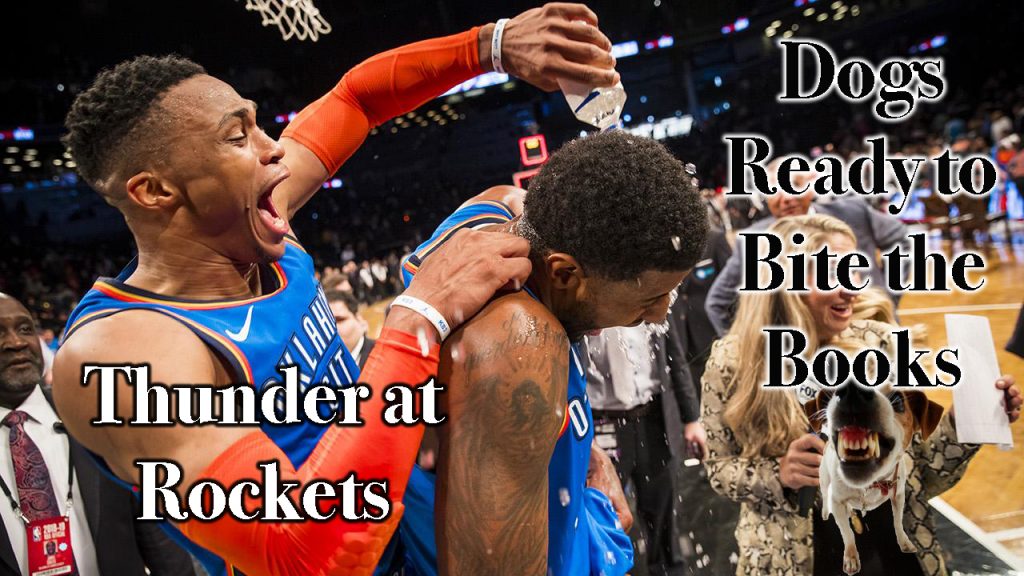 Certain sports identify strongly with the current holiday season. The NFL immediately comes to mind when you think of Thanksgiving and New Year’s Day belongs to major bowl games in college football. When it comes to Christmas Day, sports bettors immediately think of big showdowns in the NBA.

See all the scores and odds for every major sport here

This Christmas is no exception with five games on Tuesday’s holiday slate. The New York Knicks get things started as heavy 10-point home underdogs against the Milwaukee Bucks at 12 p.m. on ESPN. Later that night in a 10:30 p.m. tip on that same network, the Portland Trail Blazers go on the road as six-point underdogs against the Utah Jazz.

When it comes to finding the best value betting a Christmas Day NBA underdog, I am going with the Oklahoma City Thunder as slight 1.5-point road dogs in a 3 p.m. tip against the Houston Rockets on ABC.

I started these weekly picks the first week in December and bring a 2-1 record into this Western Conference matchup (click here to see my last article, a game the dog won SU). The ideal betting scenario for underdogs is teams getting points at home, but I have no faith in the Knicks keeping things closer than 10-points against the Bucks.

The next best scenario for finding value in underdogs is betting on one that could actually win the game straight-up. Oklahoma City comes into this game at 21-11 SU on the year with an 18-14 record against the spread. It has covered in nine of its first 16 road games and it has a 5-3 record ATS when closing as an underdog.

The Thunder’s recent four-game SU winning streak came to an end with Sunday’s tight 114-112 loss to Minnesota as 6.5-point home underdogs. This could actually work in the favor of OKC for this matchup on the road. After a slow 0-4 start, it has only lost back-to-back games once . In the first game against Houston this season at home, the Thunder came away with a 98-80 victory a five-point underdogs.

Oklahoma City is just one game in back of Denver for the top spot in the Western Conference behind an offensive effort that is 11th in the NBA in scoring (112.0 points) complementing a defense that is ranked fifth in points allowed (105.6).

Everyone continues to patiently wait for Houston to return to form that took Golden State to seven games in last season’s Western Conference Finals, but at 17-15 SU through the first 32 games this season, there are still more questions than answers. Throw in the loss of Chris Paul for the next few weeks with a bad hamstring, and I was actually surprised that the Rockets opened as home favorites in this game.

Want Premium PPH services at Amazing prices? We know you do.

Their overall record ATS is 14-17-1 with a 8-6-1 record against the closing number on their home court. Houston has gone 5-1-1 ATS over its last seven games, but betting consistency with this team has been short lived with what can only be called a roller-coaster ride over the first two months of games. The Rockets come into this game fresh off a 108-101 victory at home against San Antonio on Saturday as 4.5-point favorites after losing to Miami 101-99 last Thursday as three-point road favorites.

With Paul out of the lineup, James Harden will have to help fill the void as the Rockets’ leader in points (32.0) and assists (8.4). Most of the team’s issues so far can be tied to the inconsistencies in his game. Harden scored 35 points in the loss to the Heat and 39 points in Saturday’s win, but he only connected on a combined 19-of-57 shots from the field (33.3 %).

OKC is has covered in four of its last six road games against Houston and I have the Thunder covering again on Christmas Day.