Dogs Ready to Bite the Books: St. Louis at Winnipeg 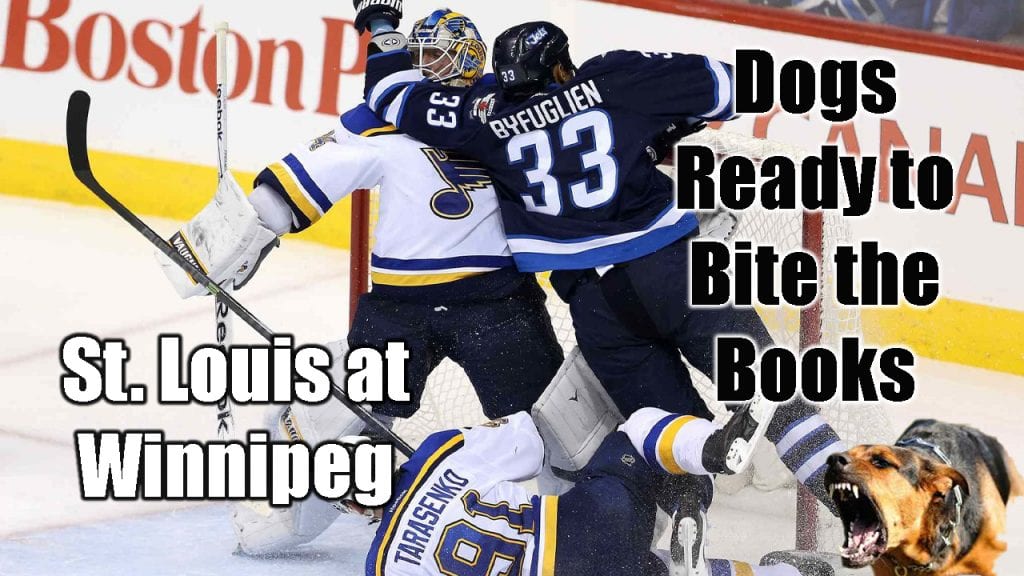 The second season in the NHL gets underway on Wednesday night with the best-of-seven opening round of this year’s Stanley Cup Playoffs. One of the more interesting matchups in the Western Conference is in the Central Division between the St. Louis Blues as the No. 3 seed against the No. 2 Winnipeg Jets.

Take a look at this NHL Futures article, giving odds for every team to win the Stanley Cup back in February.

The Blues missed the playoffs last season for the first time in seven years. The Jets will be making their second-straight appearance in the postseason after missing the playoffs nine times in their previous 10 campaigns. St. Louis is coming into this year’s playoffs as one of the hottest teams in the NHL at 8-1-1 over its last 10 games, which is another big plus for a team hungry to make up for lost time. The Jets missed out on winning the Central Division title by one point to Nashville after slipping to 4-5-1 over their final 10 regular season contests.

Game 1 of this best-of-seven clash is slated for Wednesday night in Winnipeg at 8 p.m. on NHL Network. The opening moneyline has the Jets listed as -119 home favorites with the total line set at 5.5 goals. The current moneyline odds on St. Louis are set at +108.

It is a whole new ball game when it comes to playoff hockey. There is obviously much more on the line with each and every game, but there is also a heightened sense of urgency that brings out the best in the teams that are ready to make a deep run. The Blues fit the mold for a number of reasons.

The first and most obvious reason I am looking for a fast start from St. Louis on Wednesday night is current form. Starting with a 11-game winning streak from late January through mid-February and ending with Saturday’s 3-2 shootout victory against Vancouver as -290 home favorites, the Blues have been one of the hotter NHL teams over the second half of the season. They have also been well balanced playing at home (24-15-2) as opposed to playing on the road (21-13-7).

Another big plus with St. Louis has been a defensive effort that is tied for fifth in the league in goals allowed (2.68). Jake Allen has gotten the majority of the starts in goal and he closed out the regular season with a goals against average of 2.83 over 45 games between the pipes. Jordan Binnington has started 30 games this season with a stellar 1.89 GAA and a .927 save percentage. He could prove to be a very valuable asset in goal if he can carry this kind of form into the postseason.

Right winger Vladimir Tarasenko led St. Louis in goals this season with 33 and he finished the regular season with three goals in his last four games. Center Ryan O’Reilly posted 28 goals and 49 assists to lead the Blues in total points (77). He is also coming into Game 1 with a hot hand after recording one goal and four assists over his last five games.

On game day, see all the NHL Playoff scores and odds

You still have to give quite a bit of credit to Winnipeg for everything it has been able to accomplish this season. The Jets earned the home ice in this series with the 3-1 edge in the regular season series against St. Louis after each team ended up with 99 total points. All three wins were in October and November with the Blues winning the final meeting 1-0 in early December.

With just two wins in their last seven games, the Jets have been outscored a combined 26-18 over that same span. Allowing an average of 3.7 goals down the stretch is definitely not the best way to begin a playoff series.