Dogs Ready to Bite the Books: Colts at Chiefs 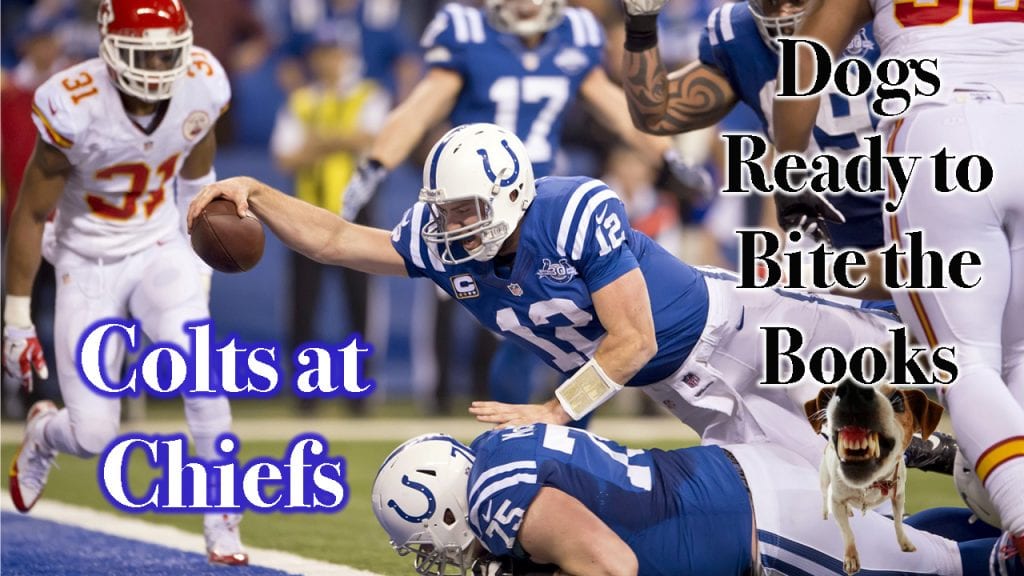 Betting underdogs was a profitable play in this past weekend’s Wild Card Round of the NFL playoffs. The good news was that three of four teams getting points won their game straight-up. The bad news for me was going with Seattle plus the point and a half as my top underdog play in the round.

Not to be discouraged, I have dug deep into the four NFL matchups in this upcoming weekend’s Divisional Round to find my top play. The points are bit more generous this time around starting with No. 6 Indianapolis getting 5.5 points on the road against Kansas City as the top seed in the AFC. The Colts made short work of the Houston Texans in their first playoff game with a 21-7 victory closing as a slight 1.5-point underdog on the road.

With Saturday’s win, the Colts have won 10 of their last 11 games SU following a dismal 1-5 start. They have also covered the closing number in four of their last five contests. Indianapolis improved to 6-3 ATS on the road this season and they have covered in four of its last seven games closing as an underdog. Check the latest odds, line movements and more here.

The Chiefs come off a bye week at 12-4 SU for Saturday’s 4:35 p.m. start at Arrowhead Stadium. They were 9-6-1 ATS this season, but they failed to cover in seven of their last nine games. This includes a PUSH in a three-point road loss to the Los Angeles Rams. The total went OVER in six of Kansas City’s last eight games and it has been set at 57 points for Saturday’s game against Indy.

Andrew Luck struggled through the Colts’ slow start in his first real action since the 2016 regular season. That is obviously no longer the case as the fifth-ranked quarterback in the league for total passing yards in the regular season (4,593). He also tossed 39 touchdown passes against 15 interceptions. The team’s defense deserves a good deal of the credit for Saturday’s win after holding Houston to 322 yards of total offense.

Kansas City was one of the most prolific offensive teams in the league this season behind second-year quarterback Patrick Mahomes. He threw for a total of 5,097 yards and his 50 touchdowns throws were the most in the NFL. Kansas City led the NFL in scoring with 35.3 points per game, but it also gave up quite a few points along the way with a points-allowed average of 26.3.

It will probably take at least 30 points to win this game and each of these teams is more than capable of reaching that plateau. The Chiefs should be considered the top team in the AFC this season given everything they accomplished, but past failures in the postseason continue to cloud the picture for Saturday’s contest.

Kansas City made an early exit in last season’s playoffs with a stunning loss to Tennessee as an 8.5-point home favorite. Head coach Any Reid has gotten his team into the postseason four times in his five years at the helm prior to 2018. The Chiefs lost in the Wild Card Round twice and they lost in this round the other two years. One of those losses was to the Colts on the road in the 2014 playoffs.

Head-to-head in this AFC clash, Indianapolis has won 13 of the last 16 meetings SU and it has gone 7-1 both SU and ATS in its last eight road games against Kanas City. My overall lean is still towards the Chiefs SU. However, I see this as a three-point game either way that might be decided by the quarterback that has the ball last.