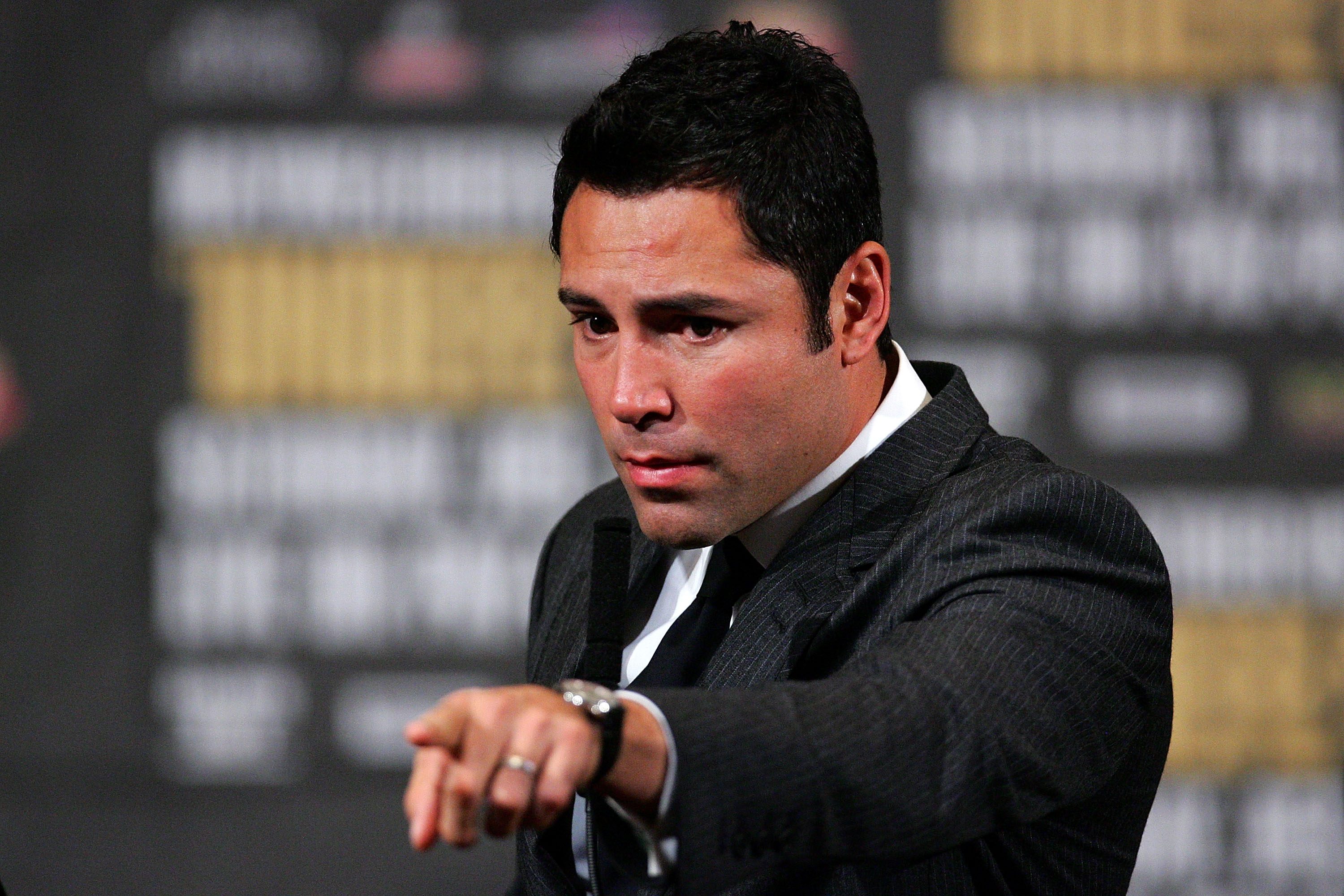 But while the tattooed and stubble-faced Puerto Rican appeared certifiably
menacing in pounding the heavy bag and hand pads and scaling an old-school tow
rope to the rafters of a 20-foot ceiling, a nearby observer nonetheless
claimed the imminent Las Vegas challenge would be as much cerebral as
physical.

In fact, former multi-division champion Oscar De La Hoya – whose Golden Boy
Promotions outfit is presenting the May 5 showdown with Floyd Mayweather Jr.
for Cotto’s WBA 154-pound title – insists the incumbent’s best chance at an
upset is to confound his unbeaten foe with patience, not violence.

“One thing about Mayweather is (that) he doesn’t care what the people in the
arena, or whatever, are talking about. He just wants to win the fight. No
matter what, he wants that W,” he said. “So, if Miguel Cotto can have that
same mentality, it can cause some problems for Mayweather.”

De La Hoya, whose split-decision loss to Mayweather at the same MGM Grand
venue will be exactly five years ago come fight night, said one of his own
drawbacks in the ring was an unshakable tendency – unlike Mayweather – to
alter his style based on outside influences.

“It’s very difficult, especially for me. It was very, very difficult,” he
said. “If I heard one boo from the crowd, I had to start throwing punches. But
if (Cotto) can stay in that zone and he can stay focused and stick to what
he’s working on, what he’s worked in the gym, he has a shot. Absolutely.

“Miguel Cotto doesn’t like a fighter to put a lot of pressure on him. It makes
him box. It takes him out of his comfort zone. Floyd Mayweather doesn’t like a
fighter to be more patient than him. It’s a matter of what style is going to
win out.”

A big part of maintaining the game plan once the fight arrives, De La Hoya
said, will be to avoid the oft-repeated lure of trying to bully Mayweather
inside, where he’s particularly adept at using angles, gloves and shoulders to
smother, deflect and avoid his opponent’s shots.

Instead, he said, working the same jab that was intermittently effective for
past opponents like Zab Judah and De La Hoya himself, would be more effective
at breaking down the gloved matrix.

“We saw something very interesting with Rios and Abril last Saturday night,”
De La Hoya said. “(Abril) was using that defense and it’s impossible to break
it if you stay close. It’s a matter of using that jab, and Miguel Cotto
definitely has a strong jab. He’s a converted southpaw, just like myself. It’s
not going to be easy, and the first five or six rounds are going to determine
the outcome of the fight.”

Cotto, upon facing assembled microphones after the choreographed two-hour
exercise, said he was indeed ready for the varied mental gauntlet presented by
his unbeaten foe.

“We have trained ourselves for what I can do, to work our plan,” he said.

The fight is his fourth since the death of his father and longtime trainer,
Miguel Sr., in early 2010, and everything from gym walls to entourage T-shirts
to ring ropes was adorned with the phrase “54/10,” symbolizing the first and
last years of the late Cotto Sr.’s life.

“He passed away, but he always stays by my side. He always stays with me,”
Cotto said. “Anything Miguel Cotto is right now is because of him. I owe
everything to him.”

Cotto won his WBA title from Yuri Foreman at Yankee Stadium in June 2010 and
defended twice in 2011, scoring a 12th-round TKO of Ricardo Mayorga in Las
Vegas in March and a 10th-round stoppage of former conqueror Antonio Margarito
at Madison Square Garden in December.

He and Mayweather held and defended the WBA and WBC shares of the welterweight
title in 2006 and 2007 amid some chatter of unification, but Cotto, now 31,
said the existing circumstances – in the heavier weight class, with bigger
gloves and with new trainer Pedro Diaz now on the team – had created “the
right moment for this fight.”

“I feel confident coming off of the victory over Margarito, who beat me in
2008. I feel great. I feel in my prime,” he said. “When you have always been
available to face anyone and been willing to face anyone and never said no to
anyone, any fight is easy to make.

“Every fight is a big challenge at this level. Everyone wants to win and
everyone does the work to win. This is going to be the next big chapter in our
careers. I took this chapter very seriously and I’m pretty prepared for May
5.”

WBO junior bantamweight title – San Juan, Argentina
Omar Narvaez (champion) vs. Jose Cabrera (No. 2 contender)
Narvaez (35-1-2, 19 KO): Fourth title defense; Suffered first loss (at 118
pounds) in last fight
Cabrera (20-2-2, 8 KO): First title fight; Lost only career fight outside
Mexico in 2008 (KO 7)
Fitzbitz says: “The Argentine incumbent is on the far side of 35 and coming
off a loss for the first time, but a home date with an overmatched foe ought
to spell V-I-C-T-O-R-Y.” Narvaez by decision

NOTE: Fights previewed are only those involving a sanctioning body’s full-
fledged title-holder – no interim, diamond, silver, etc. For example, fights
for WBA “world championships” are only included if no “super champion” exists
in the weight class.

Lyle Fitzsimmons is a veteran sports columnist who’s written professionally
since 1988 and covered boxing since 1995. His work is published in print and
posted online for clients in North America and Europe. Reach him at
fitzbitz@msn.com or follow him on Twitter: @fitzbitz.