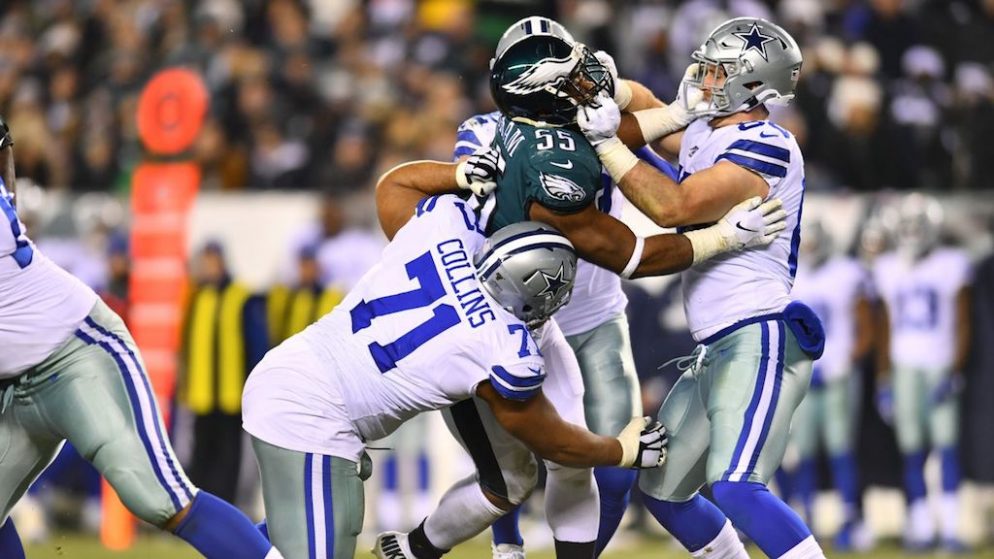 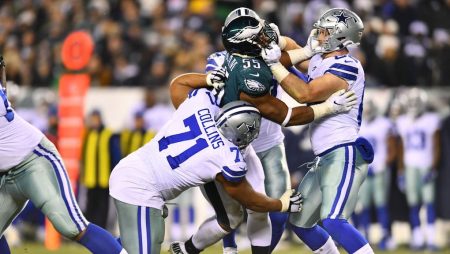 The Philadelphia Eagles host the Dallas Cowboys on Sunday Night Football. So of course, I’m bringing you a Cowboys Eagles free pick.

The Cowboys (2-5) have lost two consecutive games and their problems have only worsened. First, Dak Prescott went down for the season, now Andy Dalton is out this week.

Ben DiNucci will have a chance to shine on primetime tonight for the Cowboys.

Philadelphia are first place in the NFC East despite having a losing record. The Eagles come into this game on a one-game winning streak, as they defeated the Giants (22-21) last week.

This game has the second-lowest game total this week. Normally a head-to-head match-up will have a total north of 45+ points. However, both offenses are struggling in 2020.

Carson Wentz has had a rough season. He has only thrown 10 TD passes in seven games and he has also tossed 10 INTs. He has been a threat on the ground, though and has 5 rushing TDs.

Part of the problem has been injuries. Alshon Jeffrey, DeSean Jackson and Zach Ertz are all banged up. Ertz has struggled mightily in 2020 (178 receiving yards in 6 games).

The news out of Philly points towards this being the last season for Ertz in Philly. Roster moves and injury reports are two handicapping tools used by the pros.

We’re not really sure what to expect out of the Cowboys offense tonight. My Cowboys Eagles free pick depends on it. I mean, it shouldn’t get any worse than when Dalton was starting and maybe DeNucci will shock everyone.

He has a ton of weapons to work with, so if he struggles it won’t be because of that.

Amari Cooper and CeeDee Lamb are a great 1-2 punch at WR. Ezekiel Elliott has seen his production drop without Prescott, as teams are able to stack the box to fill up all of the holes.

Both of these defenses have struggled. The Cowboys allow more points than any other team (34.7 PPG) and the Eagles are allowing 28.0 PPG (22nd). I expect points to be scored.

The under is 5-2 the last seven meetings and 4-1 in the last five H2H games in Philly.

However, the Cowboys defense hasn’t been able to stop anyone. Even Washington put up 25 points last week. I also expect DiNucci to get this offense in the endzone a few times tonight. You can also find this one as the free pick over on Action Sports Picks.