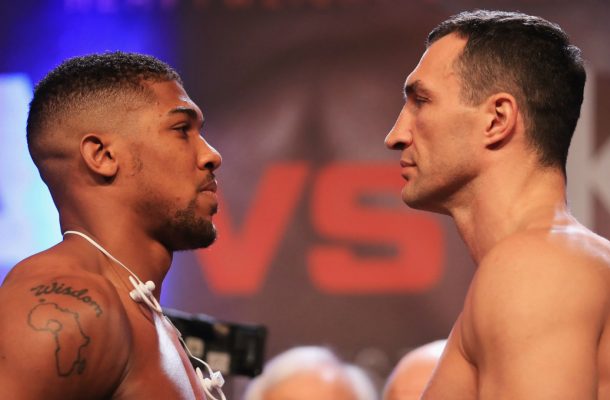 Yes, we know that Wladimir Klitschko is no longer a heavyweight champion, having lost that distinction in the ring to Tyson Fury. But his long reign left an indelible mark on the division, albeit in an era that it was not at its finest. And Anthony Joshua, the Olympic gold medalist, is seen by many as the guy who is going to “save” the division, and therefore save the sport of boxing, at least in part, as we continue to move through what is, for all intents and purposes, the post-Mayweather-Pacquiao era. This fight is scheduled for twelve rounds, with Joshua’s IBF title, as well as the IBO belt and the vacant WBA “super” crown – whatever that means – on the line, and approximately 90,000 fans are expected in Wembley Stadium for the affair. Here’s the way the TV works – Showtime will start live coverage at 4:15 PM ET, and then HBO will show it on a delay at 10:45 PM ET.

Joshua has had eighteen pro fights, with all eighteen ending in knockout victories. And there are a lot of people who would like to see him come through here with flying colors, because they see the possibility of a great fighter once again holding the heavyweight championship. But this would be a severe step in competition for him. When Fury, who beat Klitschko in a dreadful fight, was stripped of his IBF title, Joshua stepped in against Charles Martin and won in two rounds when Martin got “injured.” he has subsequently stopped Dominic Breazeale and Eric Molina in title defenses, and wasn’t in there with killers prior to winning the title, so you could justifiably say that the 2012 Olympic super heavyweight champion is swimming in deeper waters than he has before. And it would naturally be Klitschko’s objective to exploit that to its fullest.

In the boxing betting odds that have been posted on this fight by the folks at America’s Bookie, Joshua is the favorite:

Klitschko had defended the IBF title eighteen times before losing in a listless effort against the limited Fury back in November 2015. He had previously held the WBO title. So he has essentially been involved with heavyweight championship fights for more than sixteen years. A Fury rematch was scheduled, but things went awry on both ends – mainly Fury’s – and that didn’t happen. Inasmuch as some might point to Joshua’s championship opponents as somewhat less than qualified (although we appreciated Breazeale’s effort), the huge gap in experience doesn’t require much more explanation. But Klitschko is now 41, and there has been a layoff of 17 months, and he didn’t look good last time out, and Father Time is undefeated, so maybe the question is whether Joshua is psychologically ready for the moment. You can easily argue that Klitschko has not faced many opponents with this much talent.

And this is where you have to administer the “eye test.” Does Joshua have the size to not be intimidated from that standpoint? He sure does – not only is he essentially the same height, but he weighed in nine and a half pounds heavier than Klitschko. Can he take a punch from a world-class heavyweight? That might remain to be seen, but when the big guys get together, it is often the one who lands first who can take advantage, so on to the next question. Does Joshua have the kind of power that could rattle the former champion? From what we’ve seen, yes. And let us not forget that Klitschko has been criticized for not having the sturdiest chin in the world.

Wladimir is not as mechanical as his brother Vitali was, but he is mechanical nonetheless. Much of the puzzle Joshua has to solve comes down to how he deals with Klitschko’s jab, because when he throws it regularly, he makes it difficult to mount an offense. And don’t kid yourself; Joshua, as a relatively inexperienced pro, could leave himself open to the the kind of mistakes that Klitschko might make him pay for. But if Joshua can sort of master the moment – remember, this is a BIG stage – we like the way he puts punches together. He is a better fighter than Fury, and he has the potential to make Klitschko improvise more than he has been used to, so long as he doesn’t settle into that “jab, right hand” pattern that we’ve seen him do in a couple of fights. We’ll side with Joshua, but we also suspect that Klitschko, who is never really out of shape, might try and stall him and frustrate him with some clutching and grabbing, as part of his own strategy to wear down the younger guy,. so we are also going over the 8.5-round total, as the Charles Jay / America’s Bookie Challenge continues on Saturday.