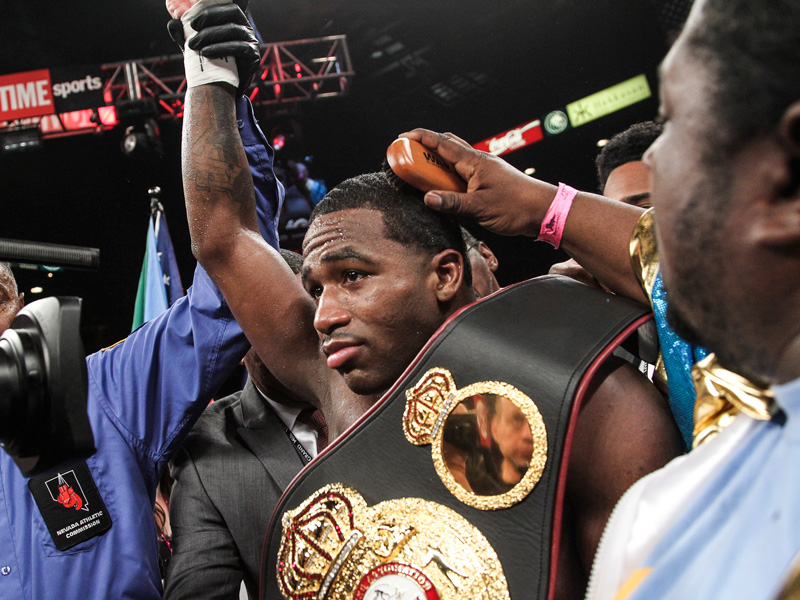 There are many boxing bettors who are hailing Adrien Broner as someone who could one day succeed Floyd Mayweather as the sport’s best fighter pound-for-pound. He may have a ways to go, and one hurdle he’ll have to clear is to get past power-punching Marcos Maidana in a scheduled 12-round bout for Broner’s WBA welterweight title. It will be the first defense of the title Broner won from Paul Malignaggi back in June.

The bout will take place at the Alamodome in San Antonio.

In the world championship boxing betting odds that have been posted at America’s Bookie on this fight, Broner is the favorite:

It has become abundantly clear that Broner is actively seeking to become something of a Mayweather clone, except that he doesn’t seem to know where to draw the line. He doesn’t have the sense of humor Mayweather has, and has consistently sought out that which is beyond the boundaries of good taste and has found it. His antics have not exactly helped him gain a wide audience of adoring fans.

And though most boxing bettors recognize that Broner is loaded with talent, that is not necessarily going to be enough to vault him into the place where he can perhaps become the world’s best fighter. he is spotless thus far, adopting a style that in some ways emulates that of Mayweather; he does stand back and give plenty of shoulder rolls, and is defensive-minded to a certain extent, but he is more aggressive than Mayweather, and has, at least in the recent past, shown more power. but sportsbook bettors also suspect that like Mayweather, a move up in weight may have an impact on the punching power of Broner.

After all, as recently as February of last year, he was defending a WBO championship at 130 pounds. He has, in very rapid fashion, moved to lightweight, then jumped to 147 pounds with that last bout. These are career moves that seem almost designed to create a possible collision course with Mayweather, who he now considers something of a friend and mentor.

Against Malignaggi the general consensus was that he was going to have an easy time, and indeed there were places where you had to lay 17-to-1 in the boxing odds with him. But because Broner is not the busiest fighter in the world, he allowed Malignaggi to take a lot of initiative early, and for all intents and purposes, he was outworked for most of the right. Malignaggi tailed off in the latter stages, allowing Broner to gain decisive advantages, and he was able to capture a split decision, after which, as usual, he got very tasteless with his opponent in the middle of the ring during post-fight interviews.

There is no guarantee that Maidana, the +335 boxing betting underdog at America’s Bookie, is going to be as busy as Malignaggi was, but one area where he is almost the polar opposite of Broner’s last opponent is that if he hits a man square, he has a chance to knock him out. Victor Ortiz found that out in June 2009, when Maidana, considered by some of the sports betting public to be a stepping stone, handed the highly-touted Ortiz his first career defeat to win a interim WBA crown at 140 pounds. Make no mistake that he is a rough customer to deal with.

He did have a sensational battle with Amir Khan in December 2010, with the WBA title at stake. he let Khan get out to a lead early, but Maidana came on strong late, although he did not do enough to win the decision. For boxing bettors who wish to back Maidana as the dog, one concern might have been his fight in February of last year against Devon Alexander, where he was confounded in losing a unanimous decision and acknowledged that he was not comfortable at all as a welterweight. Broner would seem to have the ability to make him feel less comfortable. In his last fight, Maidana stopped Josesito Lopez in six rounds. Since then he survived a serious car accident with very minimal injury, so he should be ready to go. But is he ready to win?