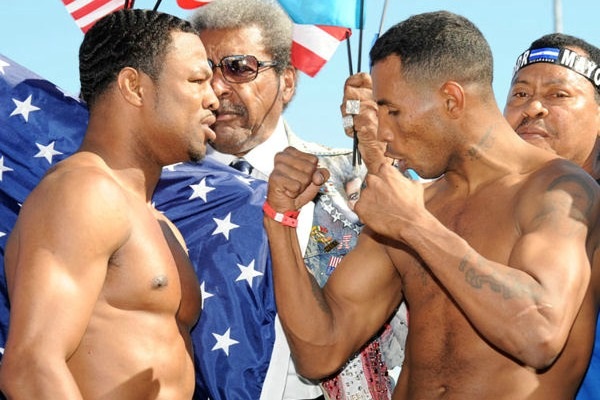 if you’re a sucker for nostalgia, you’ll probably appreciate Saturday night’s fight between Shane Mosley and Ricardo Mayorga. That might be the only audience this fight has. America’s Bookie customers might wonder about who will really be interested in a fight between two guys who are well past their prime. Well, perhaps also those boxing bettors looking for an angle, that’s who.

It’s going to be on pay-per-view for anybody who wants to see it. And it takes place at the Forum in Inglewood, California, and is scheduled for 12 rounds. It goes without saying that both of these fighters are way past their prime. Mayorga (31-8-1, 25 KOs) was last in a significant fight in March 2011, as he was stopped in 12 rounds by Miguel Cotto. He then took 3 1/2 years off and ballooned from 154 to 172 pounds for a fight in Oklahoma. Last time he was in the ring was in December, as he stopped Andrik Saralequi, a fighter with eight previous professional bouts.

Of course, Mayorga, from Costa Rica is known for his antics both in and out of the ring (including cigarette smoking), but also for his pair of victories over Vernon Forrest, which netted him the WBC welterweight championship in 2003. He lost the belt to Cory Spinks before the year was out, and after subsequent defeats at the hands of Felix Trinidad and Oscar De La Hoya, he fought Mosley in September 2008 and was stopped in the 12th and final round. Up until that time, it was actually a close bout, with Mosley holding the edge by five points on one scorecard and one point and another, while Mayorga had the one-point edge on the third card.

Compared to what he weighed for his last outing (173 pounds), Mayorga is relatively trim for this one, as he tipped the scales at 165.5 pounds. Moseley (47-9-1, 39 KOs) is at his highest career weight (159.5), although he is no stranger to fighting at the junior middleweight level.

In the boxing betting odds on this fight as they are posted at America’s Bookie, Mosley is the big favorite:

Of course, Mosley has those two wins over De La Hoya, which happened during his prime. Unfortunately, that was in 2000 and 2003, respectively. He also lost two title encounters to Forrest, proving that styles make fights. Afterward, Forrest lost those bouts to Mayorga. You certainly can’t accuse Mosley of ducking any opponents, on the way up or down; he fought an undefeated Cotto in November 2007 and lost a unanimous decision in what was a highly entertaining fight. After the KO win over Mayorga and a very impressive victory over Antonio Margarito (when Margarito had been detected to be loading up his gloves), he lost a unanimous decision to Floyd Mayweather, but not before stunning Mayweather with a right hand. Moseley also had Manny Pacquiao on the floor in May 2011 before losing a rather one-sided 12-round decision.

Any hopes of a successful comeback were dashed a year later, as America’s Bookie patrons so him get dominated over 12 rounds by Canelo Alvarez. He last fought in November 2013, going to Australia to be stopped in seven rounds by Anthony Mundine.

Moseley will be 44 years old in about a week, and understandably, fight fans might be wondering what he has left after the time off. Obviously the same thing can be said for Mayorga, who is no spring chicken at 41. But there’s an old saying that a shot fighter who was great is usually better than a shot fighter who was just good, so Mosley probably rates the edge. However, in the CJ/America’s Bookie Challenge, we are not interested in laying the -900, so if we are going to put a small play on this one, we will look for Moseley to end this thing inside the distance, with Mayorga crumbling at some point. That means “under” 9.5 rounds, which is currently priced at +110 in the boxing betting odds.