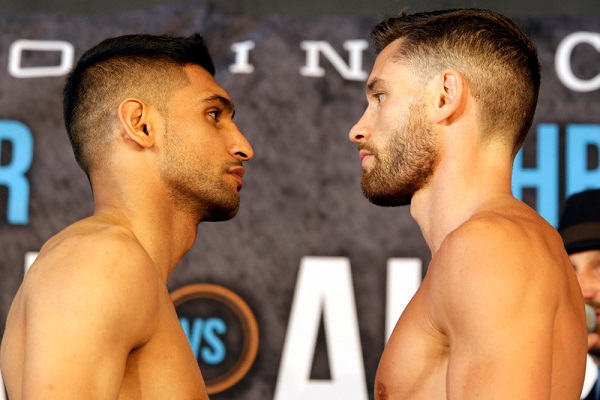 Chris Algieri has proven himself to be a valiant fighter, considering his relative lack of amateur background. But is he prepared to go up against world-class fighters and win again? That is something America’s Bookie customers are going to find out when he takes on Amir Khan in a treat for boxing bettors that takes place at the Barclays Center in Brooklyn. Spike TV will air the event, which will be at the tail end of the 9 PM ET telecast.

At stake is the “WBC Silver Welterweight” title, which Khan won originally on an interim basis from Carlos Molina one fight after he was stopped by Danny Garcia at a lower weight (which was his second straight defeat), which gives you a pretty good clue as to the quagmire that is involved with the sanctioning bodies in their current form. He brings a record of 30-3 with 19 knockouts into this bout.

Algieri is a former world champion kickboxer who has found success rather quickly as a hands-only competitor, and has shown an unusual amount of poise for someone who really didn’t have any amateur boxing experience. He won his first 20 pro fights, and one of those was against #4 contender Emmanuel Taylor, which eventually led him into the ring against heavy-punching Ruslan Provodnikov, who had previously given Timothy Bradley life-and-death. Algieri went down twice in the first round, but not only got up and regained his composure, he outboxed him the rest of the way and won a split decision, capturing the WBO 140-pound title.

This brought him to the November fight against Manny Pacquiao, for which he gave up the junior welterweight belt and moved up to fight for the WBO crown at 147 pounds. He went to the canvas six times out there in Macao, and appeared to be a little overwhelmed at times. He lost by a wide margin, but nonetheless went the distance.

The bout is scheduled for twelve rounds. In the boxing betting odds posted on this bout by the people at America’s Bookie, Khan is a prohibitive favorite, although not necessarily to take Algieri out inside the distance.

It is true that Khan has faced better opposition, and has run off a four-fight winning streak against the likes of Carlos Molina, Julio Diaz, Luis Collazo and Devon Alexander. And he is obviously one of the people who is being mentioned as a potential opponent for Floyd Mayweather. He is, when it comes down to it, a straight-up fighter, and even though his numbers don’t indicate overwhelming power, he indeed has some pop.

Khan has suffered KO losses to Danny Garcia and Breidis Prescott, who blitzed him with early power and never got any rematch for more money after the first-round KO. But most America’s Bookie patrons are aware, Algieri is not the type who is going to severely test Khan’s chin. And remember that he can’t be characterized as a natural welterweight. His strategy is not to stand there and fight, but to move and pick away. That might be something made-to-order for Khan, especially if he can walk through what Algieri has to offer, but maybe there is another angle to this.

As we could see, Algieri may have a lighter punch than Khan, but he is still made of stern stuff. Even the Pacquiao debacle, in which he was overmatched, did not end inside the distance. He does seem to know his way around the ring, with a few of the subtleties boxing bettors might expect out of veterans. Keep in mind that Khan is not exactly a “real” welterweight either, when it comes down to it. Khan is justifiably the favorite, but Algieri may have what it takes to frustrate this opponent. And he is fighting in front of a lot of home fans in Brooklyn. In fact, the Pacquiao bout was the only occasion in which he has traveled more than 20 or 30 miles from home. This is one of those instances where we will throw a small play on the longshot, for the hell of it and because the number is big. So that’s what we’ll do in the CJ/America’s Bookie Sportsbook Challenge for Friday night.