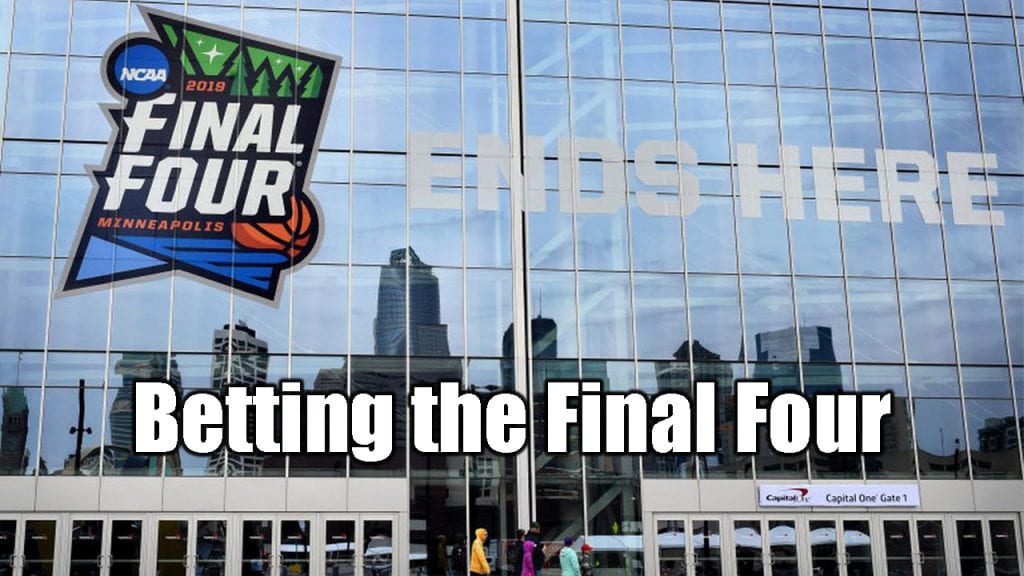 Only four teams will head to Minneapolis for a shot at the 2019 NCAA men’s basketball national championship. The only No. 1 seed remaining, Virginia, is the early favorite at +125 to win its first-ever national title. This comes just one year after the Cavaliers became the first No. 1 seed to lose a first-round game since the tournament began seeding teams.

FIND THE BEST SPORTSBOOK TO BET THE FINAL FOUR

The big surprise of the Final Four is the Auburn Tigers. A No. 5 seed, the Tigers have already beaten two of college basketball’s blueblood programs in North Carolina and Kentucky. Getting by Virginia (33-3) in the national semifinal will be even more difficult now that Chuma Okeke is done for the season. Okeke, a 6-8 forward, tore an ACL in the Tigers’ win over North Carolina.

Auburn head coach Bruce Pearl will try and push the tempo as the Tigers have done all season. The Tigers have continued to force the action in each of their tournament games thus far scoring 78, 89, 97, and 77 points in their four tourney contests. Auburn is ranked eighth in the nation in offensive BPI (Basketball Power Index), a measure of how effective the Tigers are on offense.

MUST SEE: Betting the Big Dance at Online Sportsbooks

Pearl will miss Okeke, who was a presence on the inside that was missed in the win over Kentucky. Without Okeke’s defense, the Wildcats were able to shoot 55 percent inside the paint. Okeke is also a proficient 3-point shooter. Pearl will likely miss that more than Okeke’s defense when the Tigers take on Virginia.

The Cavaliers, under head coach Tony Bennett, are the nation’s best defensive team. Virginia allowed an average of just 55 points per game this season. If you take away last week’s regional final overtime win over Purdue (80-75), Virginia gave up just 56, 51, and 49 points in its tournament games. While Auburn likes to push the tempo, Bennett and the Cavaliers suck the life out of opponents with the slowest tempo in the country.

What will have to happen for Auburn to win is the Tigers are going to have to make 3-pointers … many of them. Purdue tried it. Carsen Edwards scored 42 points and hit 10 3-pointers but even that wasn’t enough.

Auburn will also have to deal with Kyle Guy (15.2 ppg), De’Andre Hunter (14.9 ppg), and Ty Jerome (13.3 ppg). Unlike some Bennett teams of the past, this Virginia team can score. Hunter is an NBA talent who at 6-8 can defend anyone. It’s no surprise then that Auburn is the underdog to win it all at +450.

The other semifinal pits Michigan State, a No. 2 seed, against Texas Tech, a No. 3 seed. Like Virginia, Texas Tech wins with defense and head coach Chris Beard has the lineup that can matchup with most anyone. The Red Raiders have size up front with 6-10 Tariq Owens and 6-8 Norense Odiase. Beard has plenty of athleticism in Matt Mooney, Davide Moretti, and Jarrett Culver, the team’s leading scorer averaging 18.9 points a game.

Michigan State is hopeful they don’t play like their in-state rival Michigan did against the Red Raiders. Texas Tech advanced to their regional final by clamping down on the Wolverines. Michigan attempted 19 3-pointers against Texas Tech. They only made one. The Spartans have plenty of 3-point shooters including leading scorer Cassius Winston (18.8 ppg).

MSU head Tom Izzo is making his eighth trip to the Final Four. He has been here before and his teams are as comfortable playing a game in the 50s as they are in the 80s. Just ask the tournament’s overall No. 1 seed Duke. The Blue Devils fell to the Spartans in the regional final last Sunday 68-67 behind 20 points and 10 assists from Winston.

It will be the battle between Winston and Culver that will likely decide this semifinal. Texas Tech only lost six games all season, but in those six defeats Culver committed 30 turnovers. Each of the six teams that beat the Red Raiders had a quality point guard. Winston just might be better than all of them.

The Spartans also matchup well on the interior with a front line that features 6-8 Nick Ward, 6-8 Xavier Tillman, and 6-7 Kenny Goins, the team’s leading rebounder. Texas Tech will have its hands full trying to slow down Winston and company.

Virginia is the clear favorite, but Michigan State makes for an intriguing bet at +155. Again, they are the only team in the Final Four with a national title. Auburn will play without one of its best players against the best defense in the country. Texas Tech has never played in a game of this magnitude.

Should the Spartans and Cavaliers take care of business, they would meet for the third time in the NCAA tournament since 2014. Michigan State won both of the previous meetings against Virginia winning 61-59 in 2014 and 60-54 in 2015.

In both of those games, it was Michigan State and not the Cavaliers that played the better defense. In a regional semifinal in 2014, the Spartans held Virginia to 35 percent shooting from the field. A year later in the second round of the tourney, MSU limited Virginia to just 29.8 percent shooting. Izzo’s teams are very good on both ends of the floor ranking in the Top 10 in both offensive and defensive BPI.