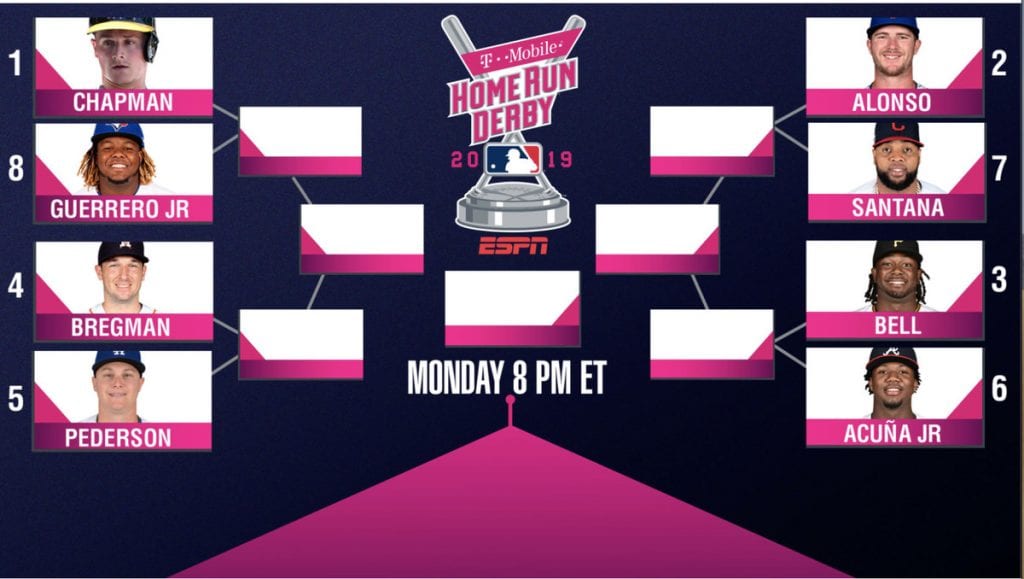 It’s the greatest sporting event of the year. Well, not exactly, but it is the MLB Home Run Derby, that annual slugfest that just so happens to be the closest thing to real sports that we can get on a Monday night in July.

We were all so excited to see reigning NL MVP Christian Yelich smoke some batting practice homers, but then he had to pull out of the event, which will pay the winner $1 million. It’s the biggest purse yet for the event, which is part of the All-Star game festivities. All the events this year are at Progressive Field in Cleveland.

Here’s what you need to know about the Derby and Progressive Field – other than it’s located in the armpit of America in Cleveland (aka Believe-land, aka We-Don’t-Believe-Anymore-Land-Cuz-LeBron-Took-Off-So-Maybe-the-Browns-Will-Win-Land). Homers to straightaway centerfield must travel just over 405 feet to make their way out of the park. The right and left field fences are just 325 feet from home plate. It’s 370 feet to left-centerfield and 375 to right-centerfield.

The one hindrance for big right-handed hitters – like Houston’s Alex Bregman – is the 19-foot wall in left field. As a result, right-handers are at a disadvantage to lefties, who see their home runs at Progressive increase 0.11 percent over other MLB ballparks.

With that in mind, let’s meet the candidates and see exactly how the average bettor can make some money. The favorite to win it all at +250 is Pittsburgh’s Josh Bell. How the Pirates acquired a talent such as Bell is beyond me, but the 6-foot-4-inch first baseman has 27 homers and leads the majors with 84 RBIs.

Bell will face Atlanta’s Ronald Acuna Jr. in the first round of the Derby. Acuna, all 6-0 and 180 pounds of him, has been tearing it up for the Braves this season to the tune of 21 homers. Bell checks in at -200 to beat the spindly-looking Acuna (+160). Sorry, but Acuna is several doughnuts and many sets of bench presses away from pulling an upset in Round 1.

After Bell, it appears that Vladmir Guerrero Jr, with his whopping eight dingers this season, is one of the favorites to win it all. Guerrero is given +400 odds to win the Home Run Derby. He’ll have to get past Matt Chapman – who? – in Round 1 in order to do so.

Chapman, the Oakland A’s third baseman, filled the slot left open when Yelich pulled out of the event. This is Chapman’s third season in Oakland and he has 21 homers thus far in 2019. This is a matchup where things could get interesting. Chapman is the dog at +120. It’s not a huge win, but it’s worth a shot. Chapman stands at +700 to win it all. Now, that’s a stretch.

The other first-round matchups feature hometown representative Carlos Santana taking on the Mets’ Pete Alonso. The big first baseman is tied for second in the majors with 30 home runs. Santana, the underdog to win in Round 1 at +145, has hit 19 so far this season. Alonso is another of the favorites to win it all at +300. 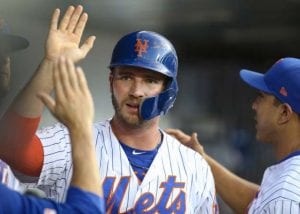 Bregman (+120) takes on the Dodgers’ Joc Pederson (-150) in a matchup of the only two players to have any Home Run Derby experience. Pederson, who has 20 homers this season, was the runner-up in 2015 when he lost to Todd Frazier 15-14. Bregman lost in Round 1 last year.

So, here’s how it plays out. With Progressive Field so friendly to left-handed batters, the switch-hitting Bell becomes even more of a favorite. For those looking for the longshot, Pederson offers some value at +450. He has one of the highest pull rates, which will help him in a park like Progressive Field.

For even more of a longshot, how about the hometown favorite Santana? The switch-hitter has popped 15 of his 19 homers from the left side of the plate this season. He’s an underdog (+145) in Round 1 and at +600 to win it all Santana could be the big payoff.