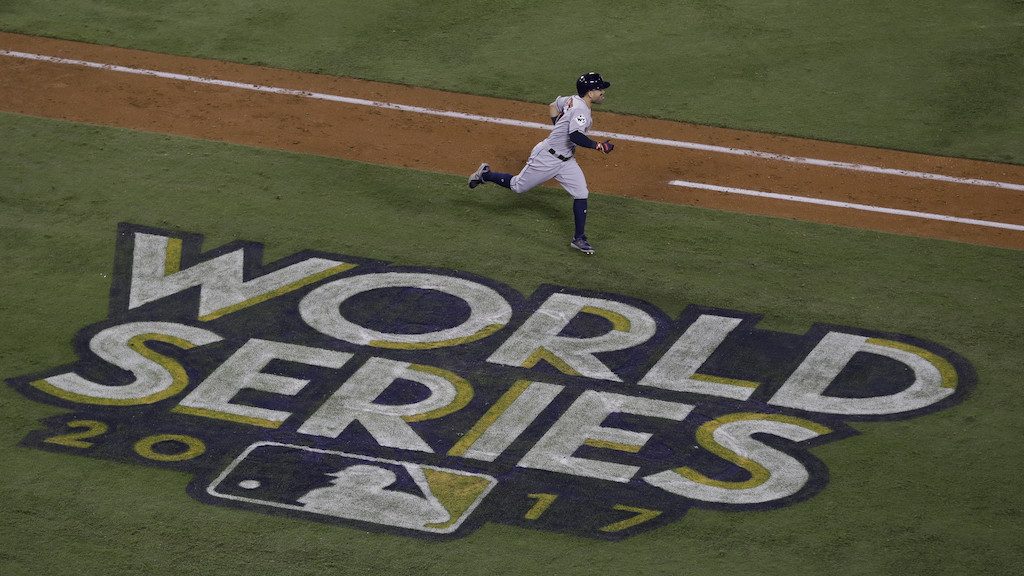 Heading into the final sports betting weekend of the month, this year’s Fall Classic moves to the top of the list at BetAnySports with the best-of-seven series between the Los Angeles Dodgers and the Houston Astros tied at one game apiece. A big showdown in the Big Ten highlights Saturday’s college football schedule and Sunday’s NFL slate features a pair of matchups between bitter division rivals.

Houston has turned the 2017 MLB World Series into a best-of-five affair with home field advantage after winning Game 2 on Wednesday night 7-6 as a -109 road favorite. The total in that game easily went OVER the 7.5-run closing line. The Dodgers opened the series with a 3-1 victory on Tuesday at home as -145 favorites with the total staying UNDER the seven-run closing line.

Game 3 in Houston is set for Friday night in an 8:09 p.m. (ET) start on FOX. Los Angeles is expected to turn to Yu Darvish as its starter while it should be Lance McCullers Jr’s turn in the starting rotation for the Astros. The new series price at BetAnySports following the two game split has the Dodgers listed as -125 favorites to win the World Series with Houston now set as a +105 underdog. Game 4 is set for Saturday night at 8 p.m. on FOX and Sunday’s Game 5 is expected to get underway on FOX at 8:16 p.m. All three games this weekend will be played at Minute Maid Park in Houston.

The Penn State Nittany Lions are currently ranked No. 2 in both national polls, but they come into Saturday night’s road game against No. 6 Ohio State as six-point underdogs with the betting line for the total set at 57. Kickoff from Ohio Stadium for this Big Ten battle is set for 3:30 p.m. and FOX will carry the national broadcast. The home team in this matchup has won three out of the last four meetings both straight-up and against the spread.

There are only two head-to-head division battles in the NFL this Sunday starting with a NFC South tilt between the 4-3 Carolina Panthers and the 2-4 Tampa Bay Buccaneers in a 1 p.m. start on FOX. Tampa Bay is listed as a two-point home favorite with the total set at 46. The featured matchup on FOX in a 4:25 p.m. start at FedEx Field is a NFC East showdown between the 3-3 Dallas Cowboys and the 3-3 Washington Redskins. Dallas comes in as a slight two-point road favorite and BetAnySports has set the total line at 50.5 points.