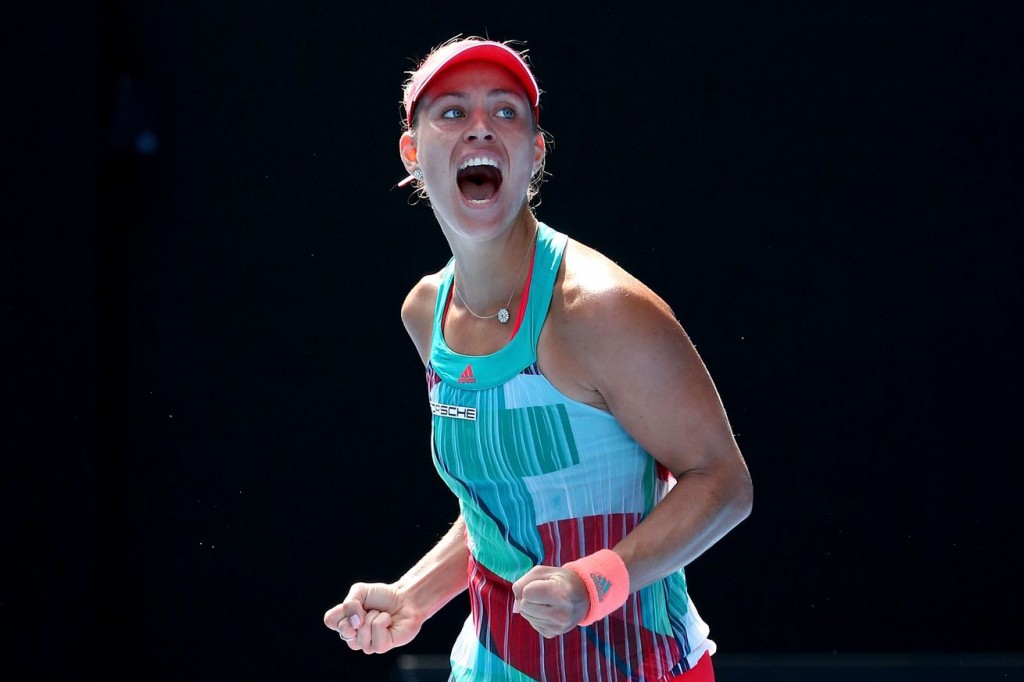 Kudos to Angie Kerber in winning her first Grand Slam title; we didn’t think she had it in her, in her defense when she totally took apart Azarenka we should’ve seen it coming. She seemed so relaxed out there and was playing the game the way it has to be played, just trying to win every point, and not caring how she looks. Many times however after a big win, player’s come back to earth in their next match after “Treeing”, but the way that she just went about her business instead of playing over her head did show signs of her moving right along in the tourney. Playing a very easy Semi Final didn’t hurt either. She woke up in the Final and said “All I need to do is win one match and I’m a Grand Slam Champion”, and she did and now the pressure is off. Look for her to be in many more Semis and Finals from here on in.
I can’t believe we are doing this, but if she was sincere we want to gives props to Serena for “acting” at least for one day like she wasn’t a sore loser and appearing (whether it was for show or not) that she was happy for her opponent. Serena is all about branding however and at this point in her career if she doesn’t win she had better not act like a jerk ,if she wants to keep on being invited to Hollywood’s “A” list parties after her career is over. We are going take the high road here and say that she was happy for Kerber.
For the Men it was the same old thing as Djokovic proved that Murray and Federer can’t beat him in a best of 5 anymore at least not on this surface. Nadal has a shot on clay or maybe a hot young player can take him out early in the tourney if he has very bad day, but for now there is no one that can compete with him. When we saw him play in the Semis of the French when he was young, we thought he would be the next dominant number one. He had all the shots. His mental makeup and physical body weren’t ready then however. Well they are now and he will reign for quite a while now.
Also kudos to Milos Raonic who proved he has the game to play with the big boys. He should’ve beaten Murray but Murray wanted it more and the Canadian ran out of gas after winning 2 or the first 3 sets in fine fashion. We always thought he was slow but has gotten his body in better shape and is a bit faster but more work needs to be done. He has the serve obviously and his coaches are groundstroke specialists, and amazingly he is coming into the net following big forehands and ending points quickly.
This is huge as he can volley pretty well and if he uses this philosophy as Federer did later in his career he will be very tough to beat as long as I said he works on his conditioning. He is the only one of the young guns at this point (Maybe Nishikori) who can play with the big boys on the big stage. Nishi has his limits in what he can do however as all he has are groundstrokes and his body is small, Dimitrov is well rounded but has no weapons, so that leaves Raonic as the only guy in the near future will can challenge the Top Guns in the majors. If I was you I would always place futures bet on Milos at America’s Bookie in every major till he finally breaks through.
This week we scatter around the globe as the “dirtballers” go to Ecuador, and there are also 2 indoors tourneys in Montpellier and Sofia. Let’s put a few bucks on Falla -240 who always plays well in South America to take out Lapentti and get our week off right. Enjoy the tennis guys and we will see you next week.