Alabama and Clemson the Only Two Teams to Bet This NCAAF Season? 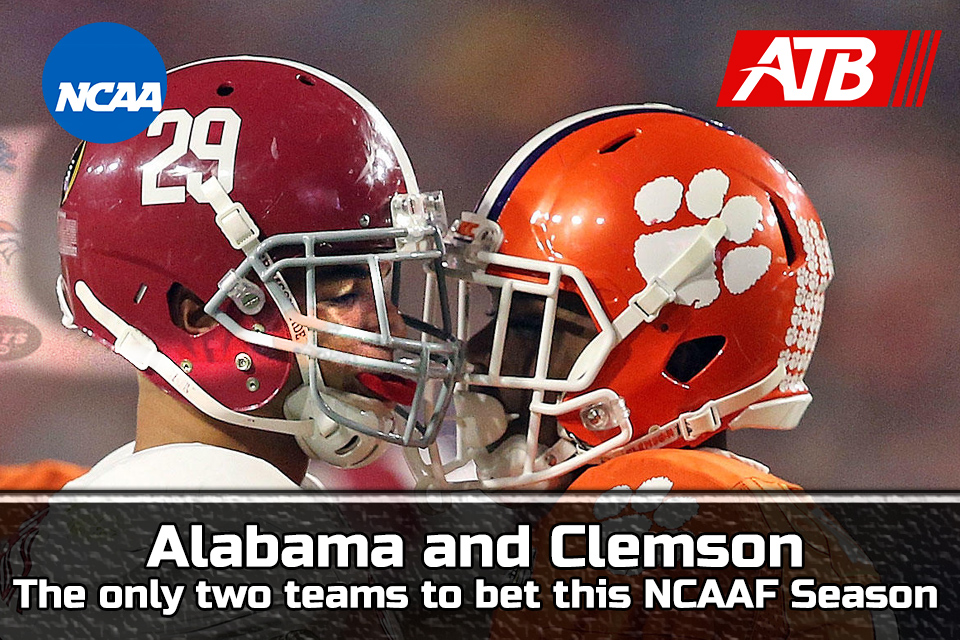 With the college football season around the corner, let’s take a look at whether or not any team will be able to contend with the Alabama Crimson Tide and Clemson Tigers.

Both teams have dominated college football the last few years and they’re both expected to rank at the top of the polls throughout the season and contend for the National Championship.

Neither team was able to make it to the first National Championship Playoffs Final during the 2014 season (Ohio State vs. Oregon). However, since then these two teams have met in the finals in three out of four years (2015, 2016 and 2018). Alabama also made the finals in 2017 and defeated Georgia.

At this point, betting on any other team to win the National Championship seems foolish.

Odds to Win the 2020 National Championship for Alabama and Clemson

Clemson is a small favorite to win the 2020 National Championship. You can bet on the Tigers to win the championship at +185 odds, while the Crimson Tide are priced at +225 odds at AmericasBookie.

I wouldn’t bet against one of these two teams winning it all again this season.

Both teams are extremely well-coached. Nick Saban and Dabo Swinney are a big reason why both of these teams have been so successful in recent years.

Recruiting plays a huge role too and no team is better at recruiting than Alabama. Bama ranks 1st in weighted four-year recruiting averages, but Clemson only ranks 10th using this metric.

This shows that coaching plays a big role in getting every player to reach their potential.

My NCAA football prediction to win the National Championship is Clemson. Trevor Lawrence is one of the best college football QBs I’ve watched in a while and he’ll lead the Tigers to another title.

One market I like at America’s Bookie is the futures bet on making the college football playoffs.

Since I don’t recommend betting against Clemson or Alabama to win the championship this year, you should look to target teams to make the 4-team playoffs.

Georgia (+120 Odds) is the best bet to make the playoffs at plus money. The Bulldogs are expected to finish #3 and it’s easy to see why. Jake Fromm is back after a great sophomore season, there are a handful of capable RBs and the defense is going to be great. The only major concern is at WR.

I also like Michigan (+250 Odds). This is a big year for Jim Harbaugh and the Wolverines. There is an opening in the Big Ten now that Urban Meyer retired. Michigan has holes on offense and defense, but they’re talented and will be led by an experienced QB in senior Shea Patterson.

The great thing about college football is that one mistake could cost a team the entire season. With little room for error, you never know what could happen during the season.

However, I wouldn’t bet against Alabama or Clemson. Both teams could easily go undefeated until they meet in the 2020 CFP National Championship on January 2020.