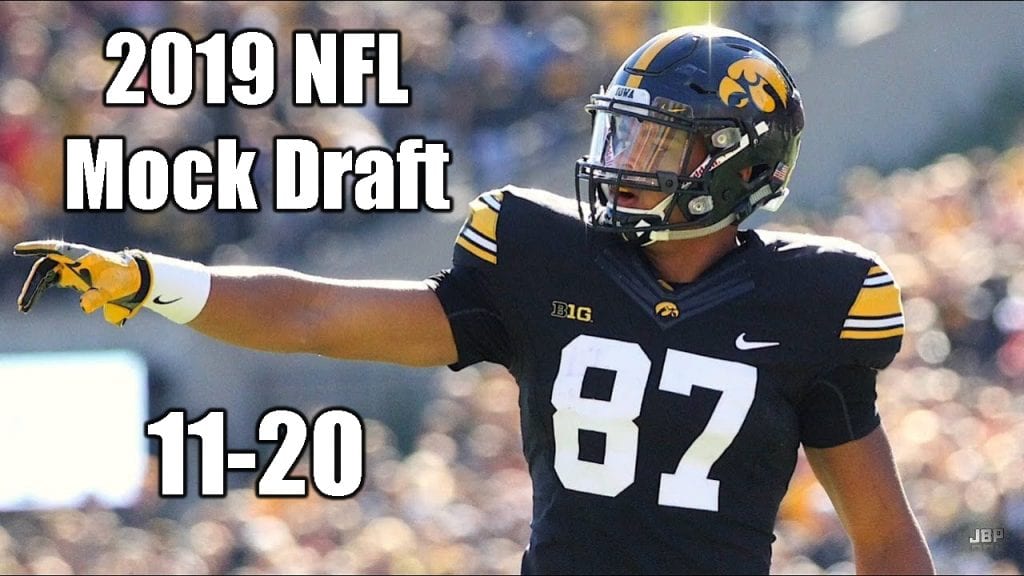 With the top 10 picks in the bag, the 2019 NFL Draft moves on to the second ten. There will most certainly be a number of future NFL starters taken among picks No. 11 through 20. Which ones will turn out to be the most productive?

The Bengals have a number of holes to fill but with the recent release of LB Vontaze Burfict, Cincinnati needs a linebacker than can make a difference. Bush, who might be considered a reach to some, fits the bill.

A little undersized at 5-11 and 234 pounds, Bush is smart, speedy, and a playmaker. Teams will pass on him because of his size, but the Bengals will put his 4.43 speed to work at the WILL linebacker. Bush can play on all three downs and his ability to run and cover will put him in the running for the NFL’s Defensive Rookie of the Year.

When draft time rolls around, online sportsbooks like Bet 33 will offer NFL Draft prop bets. With a little research, there’s a ton of value to be had.

What’s that? Another Iowa TE? You bet, and Fant is the more athletic of the two (T.J. Hockenson is the other), which will make him a great fit for the Packers offense. Green Bay signed some defensive end help in free agency which will allow them to address some glaring needs like tight end.

Here’s the plan in Miami for 2019. Tank. Yep, the Dolphins are going all-out in the race for the No. 1 pick in 2020. That way they can draft Alabama QB Tua Tagovailoa as their quarterback of the future. That means this year the Dolphins must address the defense.

Miami went out and signed free agent QB Ryan Fitzpatrick to be the stop-gap between 2019 and 2020. The Dolphins will then select Burns, a 6-5, 250-pound hybrid who could be a 4-3 defensive end or a 3-4 outside linebacker. Wherever he lines up, Burns has the speed (4.53) to rush the quarterback. A former five-star recruit out of high school, Burns was All-ACC with 10 sacks and 15.5 tackles for loss last season.

MLB is right around the corner, here’s some great MLB Futures content.

The Redskins signed Case Keenum to come in and be the quarterback since it doesn’t appear Alex Smith will be ready for the 2019 season. Could the Redskins draft a quarterback? Yes, but the guys they like will be gone before No. 15.

To get Keenum some help, the Redskins will opt for Metcalf, an absolute freak of nature wide receiver. He ran a 4.33 40-yard dash at 6-foot-3 and 228 pounds. He showed off a 40.5-inch vertical jump and an 11-foot-2-inch broad jump. His skills as a receiver will need to be honed, but Metcalf has plenty of upside potential.

After Devin Funchess signed with Indianapolis, the Panthers simply don’t have a game-breaking type of receiver. That’s where Harry comes in. He’s got good size (6-2, 228) and runs well. He clocked 4.53 in the 40  at the NFL Combine where he also recorded a 38.5-inch vertical jump. Harry even benched 225 pounds 27 times at the combine.

Big, strong, and fast, but more importantly, Harry was a three-year starter for the Sun Devils who made plays. He had 73 catches for 1,088 yards and nine touchdowns last season. That’s the kind of production Carolina needs from a No. 1 wide receiver.

After failing to grab a starter on the offensive line in last year’s draft, the Giants address the need by taking Williams at No. 17. Williams was an early entrant at Alabama where he became a fixture on the Crimson Tide offensive line. In addition to his athletic skills – 5.12 in the 40-yard dash at 6-4 and 302 pounds – Williams is extremely smart. He’s also versatile enough he could play guard if needed.

We like to offer our visitors a different opinion to help their research. Here’s a recent 2019 Mock Draft 3.0 from NFL.com.

It’s no secret the Vikings need quality offensive linemen. Ford is about as good as they come. He’s 6-4 and 329 pounds and he can move. Ford covered 40 yards in 5.21 seconds at the combine, but watching him on film he looks even faster. Ford can move for a big guy. As a tackle, Ford might be a reach. If the Vikings do it right, they take him at No. 18 and make him a guard where his athleticism will make him an All-Pro.

The Titans could really use a tight end, but with the Iowa twins – Fant and Hockenson – gone by pick No. 19, Tennessee will opt for a playmaking wide receiver. Brown suffered a Lisfranc injury at the end of the 2018 season, but he is exactly the type of player QB Marcus Mariota needs in the Titans offense.

He caught 75 passes for 1,318 yards and 10 touchdowns last season. Only 5-9 and barely 170 pounds, Brown has a high motor and could make an instant impact on a rather ho-hum Tennessee offense.

With Antonio Brown gone to Oakland, the Steelers still have the luxury of JuJu Smith-Schuster as their No. 1 wide receiver. They would draft Butler to be No. 2. Butler is big – 6-foot-5 and 227 pounds – and he surprised many at the combine by running the 40 in 4.48 at the combine. Butler was not a big-time recruit out of high school, but he finished among the nation’s top 10 in receiving yards (1,318) and yards per catch (22.) last season.