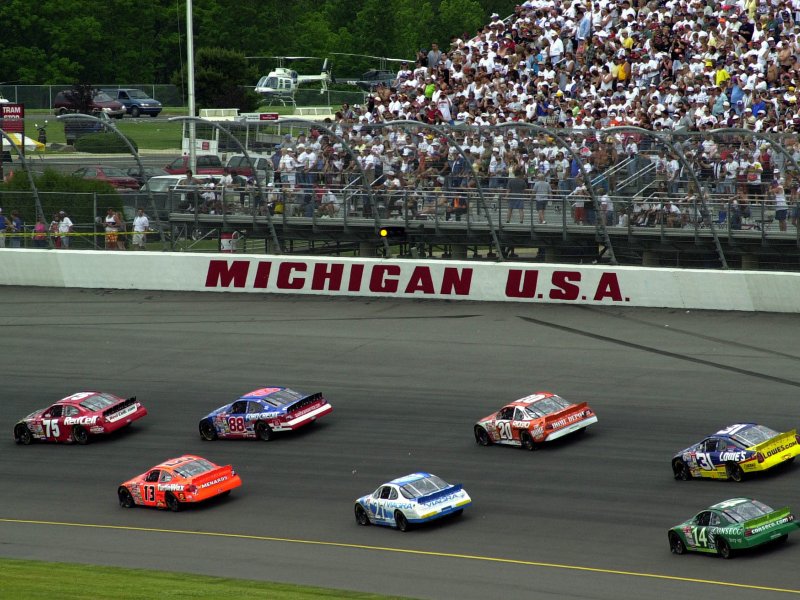 First off, I’d like to offer my condolences to the Ward family. This week the 2014 Pure Michigan 400 is on Sunday afternoon at the Michigan International Speedway. This is the second race at this track this year and it should be an exciting race.

This week four drivers opened at under 10/1 odds including Johnson, Keselowski, Gordon and Harvick. Out of those four drivers the only one to have won on this track in the L2 years is Johnson. Biffle is paying 33/1 and he offers great value, which I’ll talk about.

Jimmie Johnson (+550) broke a run of bad form at Michigan earlier this year when he won. He only led 39 laps, but he got the win and that’s all that counts. Prior to the win, Johnson had finished in 27th, 28th and 40th place in his L3 races on this track.

What Johnson will we get this week? He’s safely in the Sprint Cup Chase and doesn’t need the win as badly as some of the other drivers, so I’ll be passing on him. Kevin Harvick (+650) hasn’t won here since 2010, but he has three straight 2nd place finishes here.

He led 63 laps of the race at Michigan earlier this year, but couldn’t hang on for the win. He has the best average finish position (AFP) in the L5 races on this track (6.40). I’d consider him if he was paying more, but he definitely will be a contender.

Brad Keselowski (+600) finished in 3rd place earlier this year on this track, but for most of his career he has struggled here and at this price I don’t see any value betting on him. I’m going with Greg Biffle (+3300), as he needs to get his first win of the year badly.

Biffle has had success in Michigan, as he won twice in the L4 races here. He had a 20th place finish earlier this year and raced poorly, but I expect him to have a good race. He knows what it takes to win and he needs a win soon if he wants to make the Chase.

Kyle Larson (+1850) is another driver paying well, but I think that price is even a bit low considering he finished in 8th place earlier this year. He started in 12th place and led the race for two laps, so I think we’ll see Larsson in the top 5 on Sunday.

I’m sure another popular pick will be Dale Earnhardt Jr (+1000). The last time he won here was in 2012 and earlier this year he had a 7th place finish in Michigan. He should be a contender, but I don’t expect him to come away with the win.

Larson and Biffle should both have some nice match-up bets this weekend that I’ll be targeting. Harvick will be the driver I target in match-ups against the top tier drivers, as he has been real consistent lately at Michigan and should be near the top again.